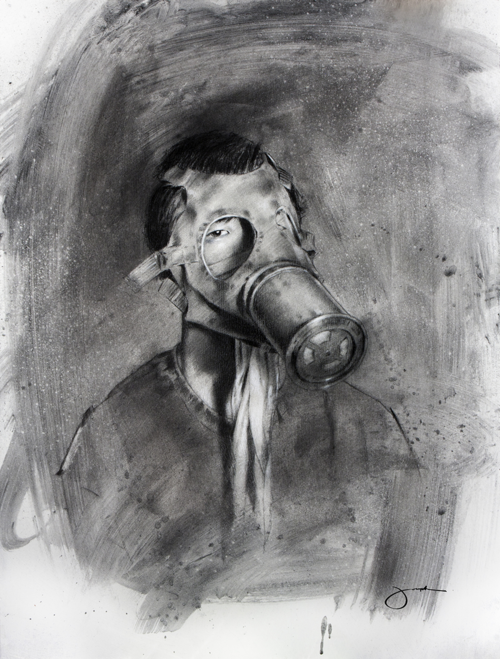 Conventional design techniques never lose their importance as the fundamental truths apply to any application of visual development from fine to commercial art, analog to digital and ideation sketches to final rendered presentation art. Key visual markers (cues used to connect with the viewer) are universal truths that make or break the emotional impact and professional quality of any visual form of communication.

Since most of my toy designs are in development, I’ll feature a fine art piece I did of my son Josh who has by now posed for a multitude of my paintings and tonal renderings. He even was the model for a book cover I photographed that went into national distribution. At this point, when he hears I need a model he quickly vanishes into his bedroom finding himself buried knee deep in very important homework. I digress.

We’ll start with what I personally believe is the most important cue of all—the inherent emotional impact of an image, which grabs your attention in spite of so many other competing distractions. The actual sketch and overall visual impact of the piece must, however, work together to capture your interest and develop a strong emotional response, even for a brief moment, which is all a good communicator needs to make contact with the viewer.

Facts are great but real defining action follows an emotional response. Hearing about the plight of poor children is one thing, but you may not react until you actually see a photo of a specific child in need—the sadness etched on her face is a call to action and you respond to right a wrong.

As for business, I’m sure you have had to sit for what seemed to be and endless dirge from a speaker pitching a new toy idea using nothing more than a monotone voice and cotton mouth ending with the corresponding result of leaving you totally detached and uninvolved. There was no emotional connection therefore no call to action.

The term Form Follows Function was drilled into my head way back in design school and is still, even in this digital age, an extremely important concept with many industry applications. This fundamental truth can also be applied to human relationships and potential responses in that a meaningful action often follows an emotional connection.

It is only logical to say that a strong idea empowers any form of interaction, especially toy design sketches, which need to demand the viewer’s attention to take them on a journey to a higher level of communication by speaking to the heart as well as the mind. This connection engages the viewer in an active dialog leading to an exchange of fresh new ideas and positive partnerships. All visual cues lead toward the point of emotional impact.

Tonal value goes hand in hand with color in that both live in the same space. The importance of correct tonal arrangements is clearly depicted in the featured art of this post showing overall shapes and patterns of light and dark. This not only forms a three-dimensional image, but also moves your eye around the composition leading you to a specific point of interest.

Note that a dark shadow pattern cast from the gas mask was positioned right next to the area of light around the eye creating a juxtaposition of stark light against stark shadow, two direct opposites creating a point of impact—an eye-catching focal point. This visual cue attracts your attention to the intended point of emotional response connecting the image to the viewer in a personal way.

Now, there certainly are visual cues hinting to a backstory that would explain why this person needs to wear a gas mask set against a gloomy backdrop, but these related facts only serve as visual cues that guide you toward the point of emotional impact found in his eyes—form follows function.

The addion of color is simply adding ramps of warm and cool hue variations to add further emotion and visual movement to the over all composition. We all know cool colors tend to recede while warm tend to move forward. This, of course, is reversed if the image is framed by foreground elements covered in cool shadow while the background elements are bathed in warm sunlight. In any case, color temperatures form ramps of color leading your eye in a specific direction for a specific purpose—all of which are design elements that make or break your ideation sketch.