Euromonitor International’s latest research reveals accelerating global growth for toys and games, with the market in 2013 registering its strongest performance of the last five years as sales amounted to US$153 billion. As the discrepancy in performance between developed and emerging regions continued to widen, the North American and Western European markets remained relatively stagnant in 2013, affected by continuing economic problems, while emerging market regions such as Latin America and Eastern Europe stimulated global growth. Both traditional toys and games, which accounts for 55% of overall toys and games sales globally, and video games (including digital gaming) recorded around 4% value growth in 2013. Steady real term growth is expected to continue to 2018.

In overall toys and games, Turkey, India, Romania, Brazil and Argentina were the industry's top five fastest growing markets globally, all recording over 14% growth in value terms in 2013. Rising disposable incomes, strong demographic fundamentals, rising urbanisation, the increasing penetration of organised retailing in rural areas and second/third-tier cities as well as new product launches contributed to the outstanding performances in these countries. 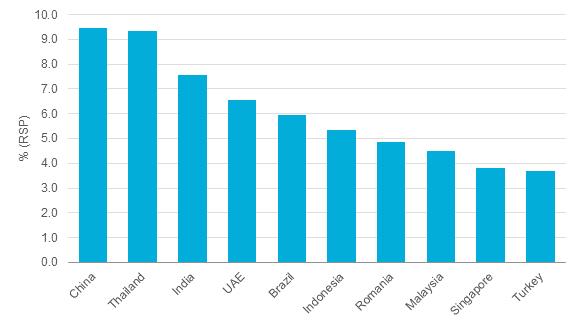 Brazil is projected to become the fourth biggest traditional toys and games market globally by 2017, overtaking both the UK and France along the way. Growth will be driven above all by a combination of positive GDP growth, low unemployment and rising disposable income. At 48 million, Brazil has the largest 0-14-year-old population in Latin America, and spend per child stood at US$80 in 2013, indicating further room for growth. In actual terms, Brazil is forecast to be the second best performing traditional toys and games market globally, just behind China, generating some US$1.3 billion in additional sales over the next five years. Scientific/educational toys, construction and radio/remote control toys are all expected to record double-digit CAGRs over 2013-2018. In 2013, Brazil was also one of the top 10 most dynamic traditional toys and games markets, recording value growth of 10% compared to a global average of 4%.

In the US, the biggest toys and games market globally, video games recorded a positive performance for the first time since 2008, recovering from an 11% decline the previous year, thanks largely to the launches of much anticipated next-generation consoles, namely the Xbox One and PS4, as well as digital gaming. In 2013, digital gaming accounted for 21% of overall video games in the US, with this share set to rise to almost 31% by 2018. PC and console game downloads was the fastest growing category in digital gaming while online games posted the sharpest fall as many companies continued to adopt a free-to-play model. Despite the release of new consoles, physical games did not see a rise in sales as video games software posted a further 5% value decline in 2013 due to extremely low sales in the months prior to the launch of the new systems. In addition, physical PC game sales dropped dramatically as popular titles such as Diablo 3 and the new World of Warcraft were released in 2012, causing a drop off in 2013.