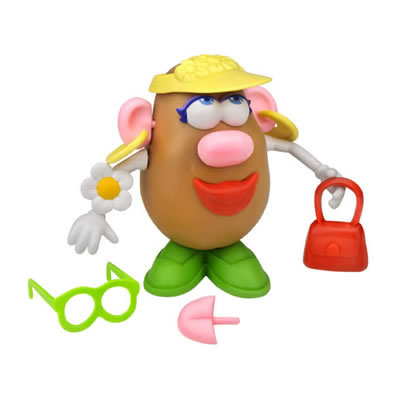 I have never paid a lot of attention to Mrs. Potato Head.  She has always seemed pleasant enough with her friendly smile, practical shoes and pocketbook.  She looks like someone’s mom from the 1960’s, a kind of potato version of June Cleaver from “Leave It to Beaver.”  In fact, she looked a bit like my Mom and I have to say that I sometimes confused them.  “Mrs. Potato Head, I mean Mom, can I go out and play?”

That was why I was surprised that she was hailed as a role model for young girls in a recent study by two psychology professors,  Aurora Sherman of Oregon State and Eileen Zurbriggen at UC Santa Cruz.  The study, “’Boys Can Be Anything”: Effect of Barbie Play on Girls’ Career Cognitions.”

Appearing in the Springer Journal on March 5, 2014, the study’s authors “randomly assigned” girls to play with either a Mrs. Potato Head or Barbie.  The purpose was to determine the impact that playing with the toy would have on their perception of potential career opportunities.

The study involved 37 girls, all from the Pacific Northwest and all between the ages of 4 to 7.  The girls were "exposed" to either a Barbie or a Mrs. Potato Head for 5 minutes and then ask to indicate career choices.

Studies like this become fodder for the press with the findings being touted as an indictment of Barbie and “sexualized” dolls.  It has resulted in headlines like:  “Play with Barbie dolls affects career aspirations for girls.”  In fact, that article quoted one of the authors as stating:  "It's sobering that a few minutes of play with Barbie had an immediate impact on the number of careers that girls saw as possible for themselves…”

I have a number of problems with this study and I will tell you about them in my next posting.