My apologies for this delayed part 2 as I just encountered some friends who provided me with some extra info. of this article.  Something exciting & fun to share….. 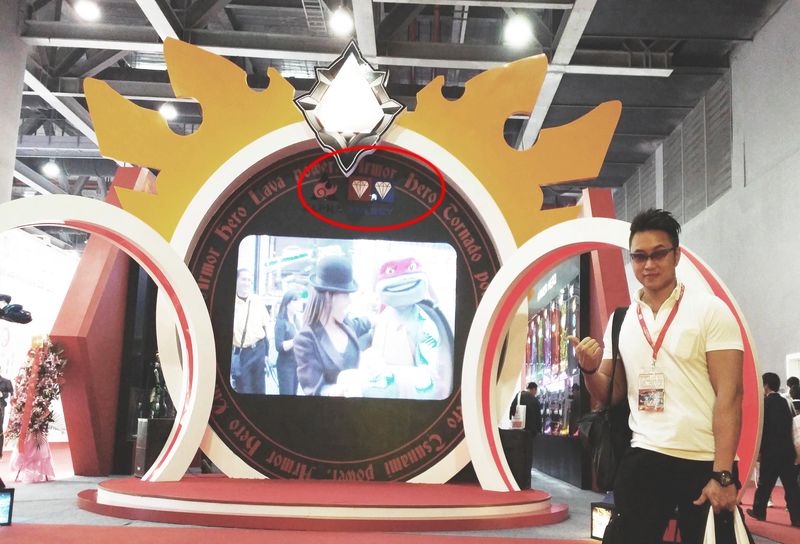 The portal like Auldey booth at Guangzhou Toy Fair

Before we entered Hall 2, we have been excited by the loudly played K-POP musics and beats.  Yes it was Gangnam Stlye by PSY, the Korean muscian who hit the world with his unique music style & his signature horse riding steps. And the video played  at the booth was Teenage Mutant Ninja Turtles promotional video , proudly announcing the distribution rights.  Auldey, in addition to her own successful brands, TV shows, featured movies, toys of various catagories, the giant of Chinese toy brand was also showing her distribution power for oversea brand at the The 26th Guangzhou International Toy & Hobby Fair

Although the detailed origin of Audley and her fonder have not been documentated.  Most Chinese and Hong Kong toy makers have quite a picture of her road of success.  In brief,  Auldey started launching emulations of the world famous Tamiya 4WDS mini racers some 20 years ago, when there was hardly anyone who knew what a 4WDS vehicles were.  Having an idea of being the first person to introduce this to China & starting from a trip to Hong Kong purchasing a few hundred dollars of those popular vehicles for references, The founder, Mr. Choi Tong Ching, 20 years later, is now 1 of the 100 richest businessman in China. Auldey's logo reflects a bit of her history – a  Tamiya double star logo replaced by diamonds. It was a primitive competative strategy to confuse consumer and win their support with much lower retail prices.  Audley then utilised her articulations, know-how and know-who to promote her vehicles in major department stores and malls in China.  Through out the years Audley has developed yo-yo, finger boards, battle spinning tops, transformable robots, remote vehicles, Ultraman and Power Ranger styled Sifi TV shows and animations. Her success story in brief has been being the first to bring international hot items or entertainments to China.  Now Audley has her own animation studios Alpha, and has been producing TVshows and big screen movies in parallel with her toy lines, an almost sure-win formula demonstrated by oversea markets, especially in Japan.

The success of Audley was not only demonstrated by her own business performance,  her influences to the Chinese toy industry was also very very obvious.  It was such an interesting phenomenon that many of the Chinese toy manufacturers' logos shared the similar Audley-Tamiya DNA. And we are not talking about some parody-like emulations of famous brands in smaller fast food business.  Those are companies or groups handling multi-million dollar business & most of them are well developed corperates or even public companies.  Although some of them might be sharing similar mind sets in logo & brand image design. In modern marketing & brand building theories, a brand logo should be unique & should not be confused with the others.  However, for shorter term strategy, similar brand logo or brand packaging might bring some short term extra benefits.  But my personal point of view, it might not be the same case in China & it surely is not the case with Auldey.  With the Great Wall-like foundations she built & the great formula of being the biggest player in China, Audley will be, without embarrassment, dominating the Chinese local toy market using the double diamond Tamiya inspired logo.

For the final episode of this brief report, I will show you all with the hottest item of this fair, a lot of fun emulations, plus a lot of great innovations too!