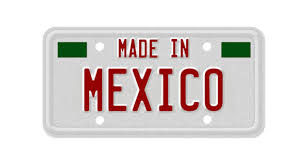 I recently heard an expert on South America express how impressive Mexico’s free market was becoming.  He compared it to BRICS nation, Brazil, and predicted it would soon pass that country as an economic engine.  Apparently, he is not the only one who thinks so.

New York Times writer, Damien Cave, puts it this way in his article:  “As Ties With China Unravel, U.S. Companies Head to Mexico:”

American trade with Mexico has grown by nearly 30 percent since 2010,…and foreign direct investment in Mexico last year hit a record $35 billion. Over the past few years, manufactured goods from Mexico have claimed a larger share of the American import market, reaching a high of about 14 percent, according to the International Monetary Fund, while China’s share has declined.

Due to the rise in the cost of manufacturing in China over the last few years, the landed price of Mexican goods has become competitive.  That plus shorter shipping times should drive more countries towards moving production to Mexico.  Well, it is happening but not to the degree you would think.

One of the reasons given is  long waits at the border due to heavy security  Another is a lack of trained workers.  It appears that where you manufacture in Mexico is very important as some areas have trained labor while much of the country does not.  Inconsistent quality is the resulting problem.

In addition, Mr. Cave’s article points out:  “…many Mexican business owners were unwilling to take on a surge of new business, either because they could not line up suppliers or credit, or because they feared demands for money from government inspectors or gangs.”

The article features toy company, Flambeau, as a major success story in Mexico.  Flambeau owner and University of Chicago trained, Jason Sauey, appears to have done a great job of managing a complex process.  There are Mexican manufacturers like Fabricas Selectas who have also been successful and have taken a position in the US market.

What other toy and play companies are manufacturing in Mexico with success or without it?  Let us know who you are and what your experience has been.