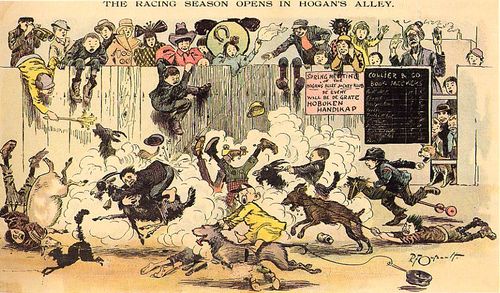 “There were really no children in 19th-century America, travelers often claimed, only “small stuck-up caricatures of men and women.”

I know I am old fashioned but I always cringe when I see a child on a tricycle wearing a helmet.  I mean it’s just not that far to the ground.

When I was a child, any kid who wore a helmet other than one for football would have been laughed off the block.  And that is what is so strange to me.  Why did our parents let us row around the creek; go out into the woods alone, catch snakes and shoot real arrows at each other?  How did we get from my under-protected to today’s over-protected childhood?

I have found an intriguing answer in an article by New York Times writer, Jon Grinspan.  Entitled, “The Wild Children of Yesteryear,” he describes 19th century kids this way:

American children of the 19th century had a reputation. Returning British visitors reported on American kids who showed no respect, who swore and fought, who appeared — at age 10 — “calling for liquor at the bar, or puffing a cigar in the streets,” as one wrote. There were really no children in 19th-century America, travelers often claimed, only “small stuck-up caricatures of men and women.”

Grinspan wonders what happened to our child rearing over the last 150 years and he does propose an answer:  Things got safer.  According to Grinspan, “[b]y 1900 American women had half as many children as they did in 1800, and those children were twice as likely to live through infancy as they were in 1850.”  As he puts it:  “Ironically, as their children faced fewer dangers, parents worried more about their protection.”

Grinspan suggests that we are as a society seem a little embarrassed by our helicoptering.  That it does not fit in with this historic American vision of childhood as a time when tough adults are made.    Maybe the safer we are, the more fearful we become.

I don’t know the answer but the fact that articles like this are being written may mean that we are starting to come to grips with how we raise children in a world that is probably in reality less scary than the one earlier generations knew.  When a walk out the door could mean a confrontation with a bear a la Davy Crocket who purportedly killed one “when he was only 3.”