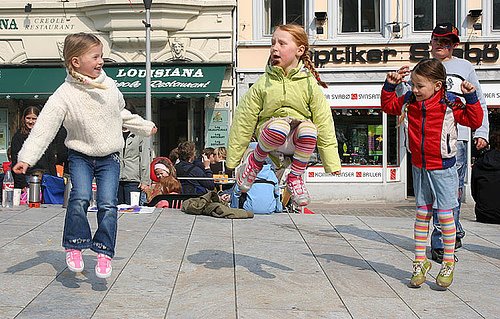 One of the earliest play platforms was the jump rope.  It along with the ball were and are the basis for an almost endless number of games.  No one knows exactly where or when jump roping came about but you can bet it dates back to the earliest rope making communities.  That means it’s been around for thousands of years.

As a result, jump roping, through its use of chants that have been passed down orally, is a purveyor of culture and politics and a powerful connection between the generations.   Unfortunately, due to the loss of street culture for kids, children are no longer passing on the rhymes and as a result we are losing that special communion children have with their forebears. 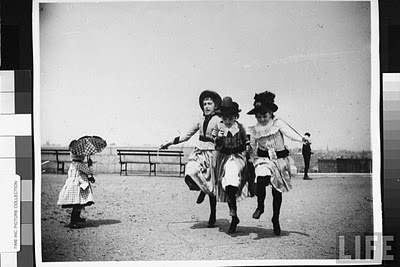 I found a very nice repository of rhymes at the Buyjumpropes web site.  I went through them as well as other random sites and found that in general jump rope rhymes or chants provide some fascinating insights on children and how they viewed the world around them.  What mostly struck me was that children had a far more precocious view of the world then adults want to acknowledge.  Consider this one:

Then there was this rhyme that I heard children in my own neighborhood sing:

There is also an historical connection to some rhymes.  Consider this one about Benjamin Franklin:

Benjamin Franklin went to France
To teach the ladies how to dance.
First the heel, and then the toe,
Spin around and out you go.

I find this one to be very interesting because it seems to date itself to the early 19th / late 18th century.  I say this because of the terms “heel” and “toe” for dancing and the fact that this had to be before Franklin was canonized as a revolutionary war saint as even children were still talking about Franklin the lady’s man.

If you have some jump rope chants that you remember, please share them with us.  Let’s not lose them.