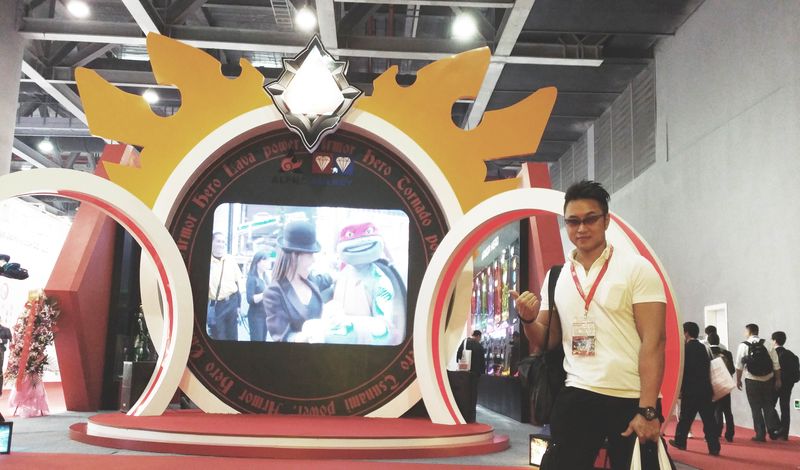 Auldey & Alpha group, one of the biggest Chinese brands, took the lead in many interesting ways at Toy Fair

Allow me to start with a locally shared memory:

Sometime around 2006, Hong Kong Toy Fair , I was at the "operation centre" on top of one of the major exhibition rooms at the Hong Kong Convention & Exhibition Centre, over seeing all booths with groups of Hong Kong toy company representatives as well as the Hong Kong customs officers, preparing to be a "designer witness" of counterfeiting toy items produced by some Shantou & Chenghai factories. It was a high profile operation to reinforce copy right protections at Hong Kong Toy Fair.

Suspected items were seized from displaying at Toy Fair but despite the exact duplications of our designs (counterfeits were understatements), no body got prosecuted as far as I am concerned.

In less than a decade,  Shantou & Chenghai factories are now showing a great transformation at the 26th Guangzhou Int'l Toy & Hobby Fair.  From master of counterfeits, self disassembling quality, cutting edge sharp points & uncut runners, inferior craftsmanship, unreliable engineering, irresponsible safety concerns, to an overall world standard productions, state of the art technologies, well organised marketing campaigns as well as TV shows, internet or smart device supporting items are now easily found at many of the exhibits.  We have heard about this tendency but we have to see it and to be there to actually feel the energy within. The venue is the new Canton Fair exhibition complex named Poly World Trade Expo Centre at Guangzhou, For those who have not been there before like me,  it looked pretty gigantic from the outside but when I got back to my hotel room, the breath-taking view from the widow really blew my mind.  In my concept, structures in this size were not supposed for human beings.  They should be part of the Pacific Rim robot factories instead. In addition to world class booths, exhibits, animations, mascots, sexily dressed promoters (in promoting swimming pools & accessories), I do have some other interesting findings at the Toy Fair  to share……….