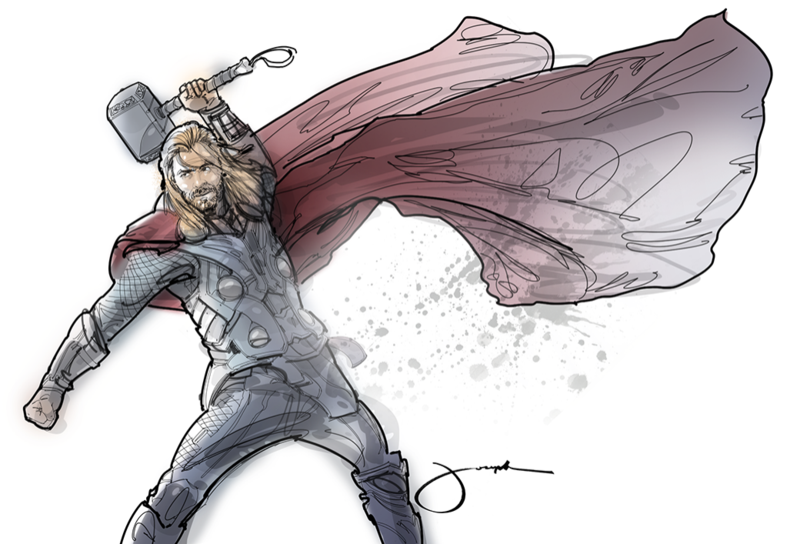 The fundamental purpose of concept art is to communicate your key points faster than words could say and making the complex easy to understand through the means of visualization. The intent is to sell the golden idea—not to make it more complicated or less attractive.

Poorly executed presentation art in a client meeting or even a student portfolio works against you by making your cherished ideas look unprofessional, which most likely will bring the dreaded and most feared—kiss of death.

What is the dreaded kiss of death? My, my, my, you need to spend more time on the couch watching movies my friend. Well you see, Jet Li, arguably the greatest actor cinema and stage has ever known, karate chopped his path through hundreds of bad guys to make his way to the meanest bad guy of all who, by the way, just happened to be picking on a little girl that very moment!

While timing bites of popcorn along with the crunching of broken bones, true die-hard Jet Li fans across this great land of ours watched with eager anticipation for the final climactic battle that was about to unfold. Sitting at the edge of my well-worn recliner that bares my personal imprint after years of steadfast service, I was surprised—no, totally blindsided by what was about to take place.

Shockingly, after several fight scenes following our hero through this gauntlet of action packed, karate chopping, bone crunching, power punches to finally reach this evil tyrant, the great yet humble Jet Li simply delivers the bad guy (with only a few quick moves by the way) the secret and highly forbidden—Kiss of the Dragon! You read it right—The Kiss of the Dragon!!

Man alive, that was cool! It was so secretive the camera didn’t even catch it all! That’s actually a good thing because if the audience saw the moves everyone would know how to do the Kiss of the Dragon, which as I said, is highly forbidden and can only be learned from a grand master who lives in the temple high on top of the mountain.

In fact, truth be told, it’s so highly forbidden that even Jet Li had to whisper that in the bad guy's ear so he would understood just how highly forbidden it really was. Man alive! That’s how bad the kiss of death is—after you get hammered someone has to explain to you what happened because you’re too dizzy to even realize you just got hammered! I mean, holy cow you've been kissed by the dragon baby! That’s gonna leave a mark! I digress.

The point being (spoiler alert!) you never ever want to receive the dreaded kiss of death or your head will explode within three minutes in slow motion with film credits following. Yes, my friend, you can blow me off but the question before you is simple—do you want to be presenting your next batch of toy ideas only to be met with the kiss of death?

Well, the odds of that actually happening to you are pretty low because Jet Li’s film schedule is so busy he probably won’t have the time to punch you out. Also, on the plus side, there's not many grand masters wandering around these days teaching the dreaded kiss of death because they're just too busy watching Netflix.

Then again, you never can be too sure so you’ll want to come back next week to read part three of this highly informative article revealing the final stage of glorious, over the top, digital color rendering.