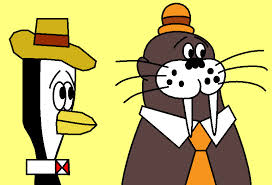 We have recently seen the resurrection of two dimly remembered, 1960’s era cartoon characters:  Underdog and Mr. Peabody.  This follows the unfortunate film revival of Bullwinkle and Rocky. What do we learn from this?  How about that Baby Boomers are still firmly in charge in Hollywood?

It’s difficult to discern why these particular shows were chosen when there are so many others lingering in that wierd attic that resides in so many Baby Boomer brains.  I mean, why not  Winky Dink, Tom Terrific with his wonderfully named archenemy Crabby Appleton and El Kabong to name just a few.  Will they come back as well?

Probably not, but I thought it might be fun to consider what cartoons might be ready for resurrection.   Hollywood, are you ready for:

Tennessee Tuxedo was a penguin.  He and his sidekick Chumley the Walrus would, on each episode, temporarily escape from the zoo and go on adventures.  The show was created by the same people who produced Underdog and featured the voice of Don Adams as Tennessee.

It was not Tennessee, however, who captured one’s attention.  It was Chumley, brilliantly voiced by Bradely Bolke, who entranced as being one of the stupidest sounding cartoon characters in history.  He is best remembered for his tag line:  “Gee Tennessee.”  You have to hear Chumley to appreciate him so you can do so by clicking here (if in a hurry go to the 49 second spot). 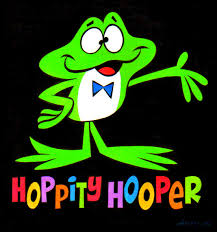 Hoppity Hooper was from the same team that created Bullwinkle, Rocky and Mr. Peabody.  Hoppity was a fairly innocuous frog who hung around with a bear and wolf and had adventures; yadda, yadda, yadda.

Yet…Yet, my friends, there was a song from that show that is nearly impossible to get out of one’s head; the insanely catch “The Boing.”  The setup was that Hoppity becomes a rock star and crates a dance sensation called “The Boing.” Here are the lyrics:

C’Mon do the Boing

It’s not hard to loin’

You grab a girl

And give a twirl

And that’s how you do the Boing.

It is due to this song that I have included Hoppity Hooper on this list.  Is there fodder for a movie there…and perhaps a dance craze? 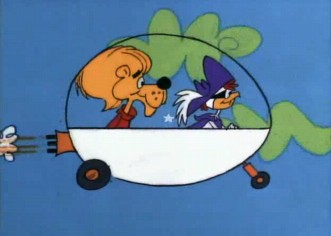 Super Chicken was another show with a catchy tune; its theme song.  In fact, I as a young man used to entertain my dates by singing the entire Super Chicken theme song from memory; you can imagine the results.

But, I digress.  The show was about a chicken who would turn into a surper hero whenever he drank his super sauce.  What was unique about the song was its ability to convey the basic plot of the show.  So, without further adieu, here is the Super Chicken theme song:

When you find yourself in danger,
When you’re threatened by a stranger,
When it looks like you will take a lickin’, (puk, puk, puk)
There is someone waiting,
Who will hurry up and rescue you,
Just Call for Super Chicken! (puk, ack!) 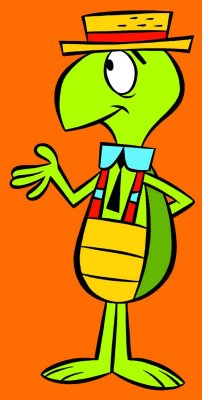 We have had frogs, dogs and chickens so why not a turtle?  Tooter Turtle was part of the King Leonardo Show and is little remembered today.  The show featured Tooter who was sent on and rescued from time travel adventures by a lizard who was, well, a wizard.

The show was fairly unmemorable except for the words that the Wizard would chant when he rescued Tooter from a time travel misadventure:

“Drizzle, drazzle, druzzle, drome, time for this one to come home.”

It’s certainly not “Play it again Sam” but it does have a certain memorable charm to it.

Let us know what cartoons from your childhood do you think should be brought back.  In the meantime, stay tuned.