Originally I titled this piece “Eating My Way Through Nuremberg Toy Fair”, but it is much more than just 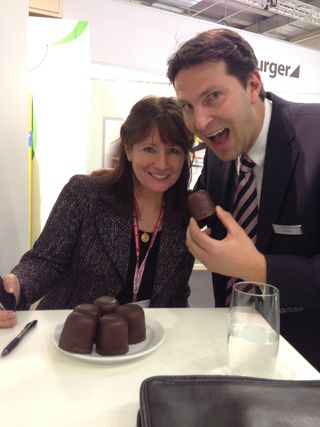 about the wonderful food. We’ve all attended many trade shows and there are none in our industry that compare with the Nuremberg Toy Fair’s hospitable exhibitors. At times it feels and tastes like a epicurean food fair. While sipping espresso and savoring fresh parmesan and chocolate from Italy in the Modiano stand, Isabel Serpa from Modiano explained it this way, “This is a public relations fair where you can find partners. People will tell others about you and the business will come later.” For the record, I have not done business with Modiano and wasn’t talking to them about business. Within 15 minutes of chatting with Isabel, I wished I lived closer to her as I could see sharing a cup of espresso with her on a daily basis. And, I did give her card to someone later that day.

Designer Carlos Bonnet of X-Swing Europe said, “Over here we first build on our relationships with the potential buyer and much later we will actual do the business. In the Netherlands it’s called “de kat uit de boom kijken” which means in English: “To see which way the wind blows” (or something like that).  If the mindset, from the potential buyer, is good and you as a person is very likeable then it’s all good and you can do business with each other.”

For those of you who do not attend the Nuremberg Fair, I thought I might share some of the tastier bits of hospitality. All the booths I visited were welcoming and all offered something to eat and/or drink, but there are standouts. One of my favorites every year is the Ravensburger booth with many selections to choose in an area that is the size of a small café. Although everything looks delicious, their Schokokuss, a chocolate-coated marshmallow treat, is something I could become diabetic over in a short period of time if they were available in the Chicago area. Please don’t tell me if they are. This treat has a very interesting history and many countries claim to have invented it.  http://en.wikipedia.org/wiki/Chocolate-coated_marshmallow_treats  Yes, that’s me in the pictures eating my second one with Frank Mueller, Ravensburger’s Innovation Manager. A few days later Tanya Thompson from ThinkFun and Pal Keller from Mindtwister joined me at the Ravensburger booth. Yes, competitors are treated royally as well! (Picture of Tanya and Pal at end of article.)

Moving on, Rory from Rory’s Story Cubes offered coffee and amazing Irish Chocolate – Lily O' Briens Chocolates. The Irish are proud of their chocolate, they say it is because their cows are raised on robust green grass and just laze around. Works for me. The chocolate is scrumptious!

The Goliath Games booth is always welcoming. Along with their coffee bar, they offer a delicious gift to take with you. One year they had cheese wedges of many varieties as big as pieces of pie. Another year waffle caramel sandwich cookies in a lovely tin. This year it was a hard candy that is called 'Zwolse balletjes'.  Zwolse is a reference to the town they're from. Dutch delicacy that since the mid- 19th century, according to the traditional (secret) recipe is prepared in Zwolle . Zwolle balls is available in only one store on the Grotekerkplein in Zwolle – the Zwolle Ball House . Google translatation of their website will explain this traditional candy: http://www.zwolse-balletjes.nl/  To the right are pictures of their stand, the candy and Margareeth and her daughter Naomi Golad of the founding family.

Jumbo hosts one of the most crowded get-togethers in their booth. Dirk von Wassenaer, the owner who formerly lived in Barcelona, Spain where he learned to appreciate their wines, flies in specially selected Spanish wines and Serrano ham for their annual get together in Nurnberg which gets more crowded every year! The appetizers are amazing and the wait staff struggles to get through the crowd. One might think they are at an event hosted by Food & Wine. And, so gracious! You see competitors toasting one another and enjoying Jumbo’s generosity. Richard Gill, a longtime friend of Dirk, said, “It has become the centre of many friendly reunions and informal meetings over the years – who knows how many deals have been struck there!” I wish I had pictures to post and if anyone does, please send and I will add it to this article.

In the HCM Kinzel booth, they had a juice and cocktail bar with interesting combinations that were
delicious. They had comfortable seating, too, because as we know, trade shows are exhausting. I could do another mile or two after enjoying their hospitality. Kinzel distributes ThinkFun products in Europe and in the picture of the bar is ThinkFun’s Jodi Meusel.

Even the inventors in the private offices have amazing offerings. I met with Theo, Boaz and Gideon Coster and for this toy season (as they said) they
offered Fresh Israeli organic peeled Pomelo from the Port Farmers Market, Davaeil : (snacks) Chickpea sticks with Yemenite spicing made in the Yemenite quarter of Tel Aviv,  Rye savory cookies covered with sesame & nigella specially baked for them  in Yeesod Hamm'ale,  Galilee and they said I missed (they ran out, so they must have been delicious as well) the Small Tahini (sesame paste) sweet cookies which was specially baked for them  in Yeesod Hamm'ale, Galilee. The Costers are as serious about food as they are toys and games. I didn’t need lunch after meeting with them.

Something that adds to ambiance of the show is that booths (or stands as they are called there) do not use drape. All stands have hard walls that are decorated beautifully. The feeling is more welcoming and warm, more permanent, unlike the show drape in the USA that is not friendly or beautiful and remind you how temporary the show is… and possibly the relationships you make while there.

In writing this article it has become clear that so many of the exhibitors offer specialties from their home country – an offering from the heart.  It would be wonderful to see such tradition and hospitality spread to the other shows.  I will make a point to step it up and be more hospitable and offer something from the heart in our booth at New York Toy Fair. I wish I could do justice to Chicago style pizza or hot dogs at a Fair in NY. Perhaps I just have to make a big batch of Cranberry Chocolate Chip Cookies.  I’m in booth #2911. Come on by!