As I explore in Euromonitor International's new global briefing "Toys and Games in Emerging Markets: Consumer Fundamentals Falling into Place", emerging economies already account for a considerable share of the global toy market, and will provide the strongest boost to global toy and games sales between 2012 and 2017. Latin America has been one of the fastest growing toys and games market globally, while in a few short years Asia Pacific is projected to become the largest toys market, overtaking both North America and Western Europe. Hence, all major global toys manufacturers are increasingly seeking ways to enter and expand their presence in these markets. The strategies they adopt now will determine their success in coming years. 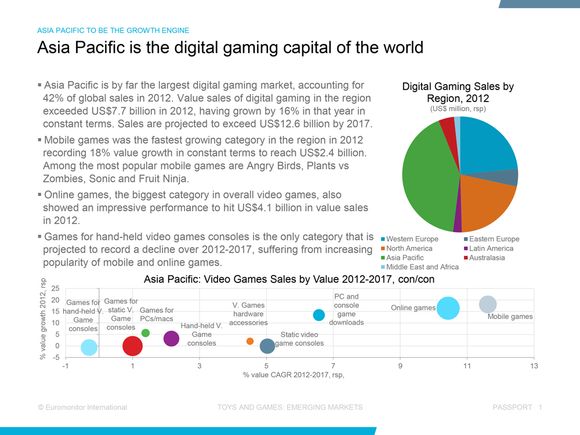 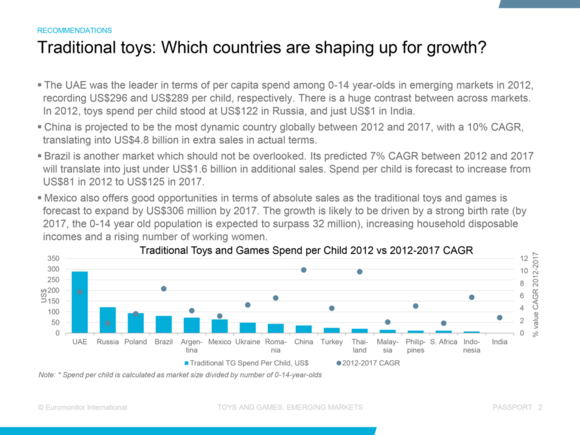 Sales of traditional toys and games in Latin America exceeded US$10 billion for the first time in 2012. Brazil is projected to become the fourth biggest traditional toys market globally by 2017, overtaking both France and the UK along the way. In video games, Mexico accounted for almost 36% of the region’s sales in 2012

In just a few short years, Asia Pacific is forecast to surpass North America, becoming the largest traditional toy market by 2014, accounting for 26% of global sales by 2017. In 2012, China became the second largest traditional toys and games market globally, overtaking Japan. The region is also the digital gaming market capital of the world, accounting for 42% of global sales in 2012.

Eastern Europe – Russia is the country to target

Over 62% of Eastern Europe’s projected growth in overall toys and games is forecast to come from Russia, equating to more than US$1.2 billion, making it the most attractive regional market.

Although internet retailing is one of the most dynamic sales channels, it represented just a fraction of toys distribution in almost all emerging markets, accounting for less than 10% of traditional toys and games sales in all but two markets.

The right category and price could determine success

Pre-school is generally the category to aim for when considering emerging market expansion. A carefully implemented pricing strategy is also one of they key areas to focus on, as most of these markets are still price sensitive.