Russ Crupnick, Senior Vice President of Industry Analysis forNPD called me last  month to discuss my comments on the "Play Industry."  He had some different perspectives and what started as a conversation turned into a  vibrant point counterpoint discussion.  Here is the exchange which you can find on Russ's NPD blog where it originally appeared.

In the age of electronic media, I often find that the best conversation isn’t contained in the articles or blogs themselves, it’s in the comments that follow. While the author of a blog may serve up the topic, the debate that the readers create is often more insightful and interesting than the original writing.

This is the season for reporting year end trends in market size and growth.  Last year, when NPD released our 2012 results for the toy category, our colleagues at Global Toy News suggested that the industry needed a wider lens for measuring the market; a “better map” they called it. Over the past year Global Toy News has published stories on the concept of “play”- the idea that toy marketers and retailers need to think broadly about the environment for a child’s attention, and a parent’s money. The toy industry, they opined, should “demand the data and analysis” to compete in a 21st century world of play (as envisioned by Global Toy News). In a series of exchanges, we questioned these ideas, not so much from an intellectual perspective, but rather from a commercial standpoint. The truth is, I’m in  agreement with Global Toy News but wanted to raise some issues that, in my opinion, make it difficult to implement their vision. 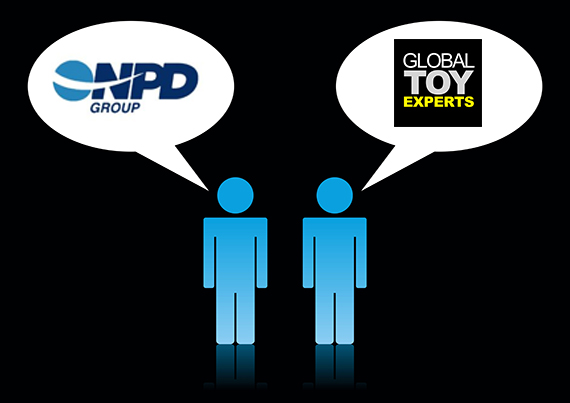 Global Toy News has played an important role elevating the concept of “play” to its readers. I’ll admit though, that each time I read or hear a pronouncement about the “play” topic, it causes some inner conflict. Looking at the total customer or child experience, or what gets labeled as “play” makes a lot of sense. My only disagreement, as expressed during my PlayCon presentation this past year, is that this is really nothing new. In that talk, I cataloged my own childhood experience to illustrate that the concept of “play” didn’t arrive with apps and smartphones. I experienced it nearly half a century ago when conflicted between playing with my James Bond spy suitcase, reading Hardy Boys, racing Aurora HO cars, or riding my bike.

GTN also (indirectly) raises the question of whether the research firms need to do more. I’d agree that, as researchers, it’s our responsibility to understand the ecosystem beyond toys. Nearly a decade ago, NPD began looking at cross-entertainment trends, an endeavor that led to ongoing tracking across movies, music, games and other activities in a service known as NPD Entertainment Trends. There’s a lot of evidence that NPD and other research companies “get it.” We used those first cross-entertainment studies to understand how blossoming home video options and home theater were impacting movie box office, or if a DVD launch would be hurt by a blockbuster video game release in the same week. Today, at NPD, we regularly look at the cross-effects between traditional toys, video games, devices and apps in order to understand potential cannibalization or positioning opportunities.

These are interesting studies – my favorites, in fact. Who can resist,

as a research analyst or strategist, the intellectual challenge offered by these questions? No wonder the “play” landscape is such a compelling target.
But, to borrow from Richard’s blog, it’s a commercial black hole. At the recent Dallas Toy Fair, I didn’t hear one manufacturer ask about “play,” or videogames, or music streaming, or Netflix, or Instagram. No, they asked simple fundamental questions like “how do I get this toy into (insert retailer here),” or “Where do we rank among kid’s puzzles,” or “How big is the market for this type of doll/action figure?”

Commercially, the industry needs to sell-in product, then sell it through. At most retailers, especially the larger specialty, big box or online retailers, the toy, electronics, videogames, music and home video buyers are not the same individuals. The selling discussion isn’t about “ecosystem,” it’s very specifically about growth trends, assortment, shelf position, pricing and deals on very specific toy items. I’m sure the buyers are as intellectually stimulated by “play” as Richard and I, but it’s not how the business is run.

So here’s the conundrum: Intellectually, it’s hard to disagree that “play” is a powerful concept. Commercially, however, it is not how the toy industry does business. I’d suggest that the industry would benefit even more from optimizing the toy buying process, using data to better utilize limited shelf space, managing pricing and promotion to improve margins, and localizing marketing for targeted regional campaigns. Until toy retailers evolve to accommodate the “play” business as a whole, that seems like the bigger win.

The World Is Round and There Is a Play Industry

Russ Crupnick recently responded to a series of articles that I have been writing about the greater play industry subsuming the toy industry.  Simply put, I assert that traditional (3 dimensional) toy and game companies compete with any company that provides play; whether it is video games, digital play or playgrounds.     In fact, with over 1 million apps available for download, we have never before had such a supply of play.  As a result, the competition has moved from space on a store shelf to available time in a child’s mind.

But is the way we see our business important?  Does it make a difference whether we believe we are in the toy or play industry?  I think so and here is why:  A failure to know who your real competition is inevitably leads to failure.

The business philosopher, Peter Drucker, wisely pointed out that Penn Central and other railroads reacted to the advent of trucks, buses and airlines by believing that those were separate industries from the one they were in:  The railroad industry.  Of course, they weren’t in the railroad industry; they were in the transportation business.  That’s why just about our only choice of train travel is now government owned Amtrak.  A similar story can be told about Western Union who thought they were in the telegraph business and didn’t see telephones as competition.

I fully agree with Russ that play has always crossed platforms.  That, however, is not the issue.  The challenge is that many toy industry manufacturers have little or no knowledge of the people and companies with which they compete.  As Russ puts it, “At the recent Dallas Toy Fair, I didn’t hear one manufacturer ask about “play,”, or videogames, or music streaming, or Netflix, or Instagram…”

That sentence frames the essence of the problem.  As a result, those of us who argue that there is a play industry are like those who once argued that the world is round and not flat.  Many of us can remember when we on earth got our first view of the “Big Blue Marble;” that wonderful photograph of earth as seen from outer space.   By seeing Earth as one world we were able to grasp that we were more than a group of countries.  In the same sense, if we at companies like Global Toy Experts and NPD do our jobs right; we can give the toy industry a vision of what the play industry really looks like; one big ecosystem.