The link between board games and apps is becoming increasingly relevant to board game inventors and app developers, and for that matter, the entire toy and game industry.  That was why I wanted o share inventor David Mair's story.   After receiving his BA and MA from Montclair State University, David Mair taught art in Newark, NJ, and film-making at Montclair State College.  He worked as a studio manager and set designer in New York City. In the late 70s, he began his current vocation as toy and game inventor.  Since starting that career, he has invented over 600 games, toys, and puzzles.  With the help of his long time agent and friend, Michael Kohner, of The Michael Kohner Corporation, more than 100 items have been marketed world wide. Besides inventing, Mr. Mair enjoys photography, painting, gardening, and travel.  David is married and has four daughters. He and his wife live in Randolph, New Jersey. 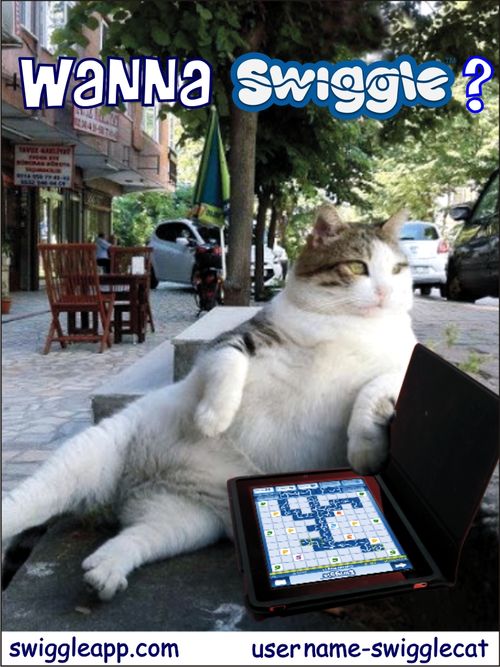 Swiggle was born on August 27th of 2005, in the middle of the night, when all great ideas are born.  How do I know it was the 27th of August?  I had listened to an NPR news story on the Scrabble championships that year, and how the Thai players, who were less than fluent in English, were among the top players in the world.  They were memorizing every one of the 120,000 words that were officially acceptable.  That made me think: Scrabble was more of a strategy game than a word game to these players.

I went to bed with those thoughts in mind.  At some point in the night, I awoke and jotted down some words on a scrap of paper and went back to sleep.  When I got up that morning, I looked at the words I had written down, “Scribble Scrabble”.  I thought for a minute, and the idea of seeing number-valued tiles forming a wandering line on a Scrabble board materialized.

Several weeks of work making a prototype followed, and then there were several more weeks of play testing with friends and family after that.  Finally, I was ready to show my agent and friend, Michael Kohner, the finished product.  He loved it and arranged a meeting with Mike Gray of Hasbro.

Sitting at a table in Michael Kohner’s New York office with Mike Gray, I put the game out on the table, and before I could say a word, Mike Gray said, “You don’t have to say a thing.  I get it!”  He let me give him the overview anyway, and off it went to Hasbro.  The rights were purchased in March of 2006, and shockingly by May we were given back the rights.  The reason:  Scrabble is a word game and any games associated with it had to involve letters.

By the end of May, Goliath B.V. in the Netherlands bought the world rights.  The name “Loopit” was chosen, and the game was beautifully designed, packaged, and ready for delivery.  Goliath presented the game in every market including the United States, where it made it to Games Magazine’s Top 100 list.  Sales were not as expected, despite Goliath’s best efforts, and in October of 2012, the rights were returned to us.

Every once in a while I looked up from game ideas and venture out of my studio to take a trip to the toy stores. What I saw there was the ever decreasing size of the game aisles. Down from the 4-5 double aisles in the 70’s, to the one side of one aisle today.  What I also saw, as a consequence of the deceasing space, was the lack of variety and the number of companies manufacturing the games, which meant few companies to which we could show new products. At the same time in the toy stores, the electronic and digital game area was growing larger and larger. This is old news to any one who breathes, but to anyone inside the industry, it was the “writing on the wall”, to coin a phrase.

Michael and I had many discussions about this new reality, and it was then that we revisted an idea that had surfaced some 5 years before: to turn games into an apps, and more specifically, Scribble Scrabble/Loopit.  The success of Words With Friends gave the idea added impetus.  Through a contact suggested by a mutual inventor friend, Michael and I met Steve Curtin of Shore Digital Solutions.  We agreed to form a partnership to make this app a reality.  The name changed once more, this time to Swiggle.  After 6 months of meetings, beta testing, and many changes and additions to make it an app that looked professional and extremely playable, Swiggle was officially launched on January 13,  2014.

Making a beautiful, playable app was almost the easy part, as we started to pull together a marketing plan.  This was an area in which Michael and I have very little experience, but Steve has many years in this area, and plans that included “pay per install” (PPI) advertising were set in motion.  These are the ads that appear on other game apps between plays etc..  The beauty of the PPI’s is we only pay for the ads if they produce an installation of our app.  I designed a campaign distantly related to the “Got Milk” ad campaign.  [See attached ads]

I wish I could use the cliché “and the rest is history”, but we are just at the beginning of the journey.  It’s been a great ride so far, and the tremendous feedback from people all over the world makes the future look very good for our “baby”.

“Wanna Swiggle?”  Look for us at swiggleapp.com