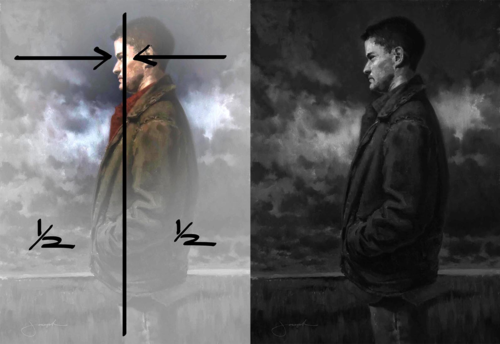 This image shows how the rule of thirds was broken to strategically design more visual tension into the image composition. Storm Clouds, Joseph Sapulich © 2014, Oil on linen.

There are times, however, when you need to break the rules to create a specific feeling and tension to tell the story and convey the character’s emotional state of mind. After all, in regards to the toy industry Transformers toys would have a different emotional sensibility than the Barbie franchise—it’s just logical to note that the visuals representing them would have their own distinct emotional design sense.

The oil painting used here in this article is called, Storm Clouds. All focus is on his face and especially his eyes which the composition places smack dab in the center of the canvas. This of course breaks the Golden Rule, which would automatically place them off center to make a well balanced composition.

Making matters worse, the layout actually splits the image right in half forcing the character’s entire face against that dividing line. In fact, his whole body is positioned adjacent to this line allowing parts of it to precariously break through while the majority is held back.

In most cases this would be considered bad composition, but in this specific situation it creates visual tension which is exactly what’s needed to heighten the emotional impact of this image. The strategic design choices of this layout speaks to our imagination and we feel the storm and tension building all around and also within him.

Breaking the Golden Rule is done in film all the time to add to the pacing and cinematic flow of the story arc. Bringing this concept home, even the best PowerPoint presentations vary the focal points from page to page and then land a knock out punch smack dab in the center to make the final thought have the most impact.

The rule of thirds is used all the time in character design within film, cartoon strips and the toy industry to create some of the most memorable characters of all time. Breaking the rule, when needed, also creates memorable characters and emotional ties with audiences and consumers alike.

I think you get my point. This technique will organize your thoughts and ideas into logical strategic patterns to achieve the desired successful outcome. Ideation designs, final production art and even presentation layouts will have much more impact and visual flow from one idea to another by applying the Golden Rule and even breaking it from time to time.

After all, some rules are made to be broken. Make sure, however, you do it for a good reason and sparingly—to make a specific point and emotional statement. Remember, you are never too good and never too smart to learn something new and to try something different.

Just make sure you have fun along the way.