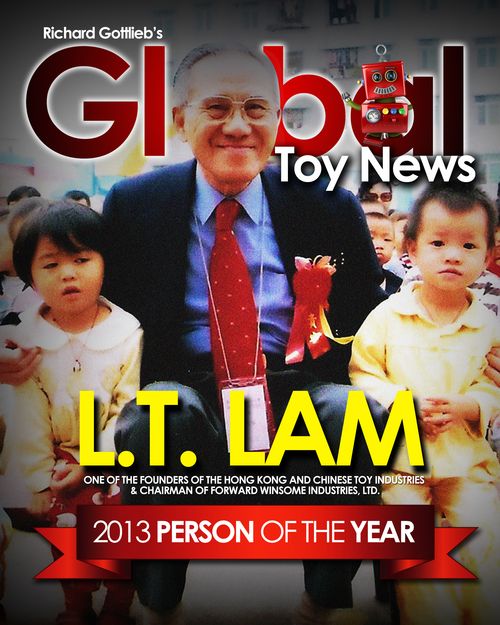 This year’s 2013 Global Toy News Person of the Year is Hong Kong’s own Mr. L. T. Lam.   The Global Toy News Person of the Year award is given each year to an individual who has helped make the greater toy industry a stronger, more enjoyable and far more prosperous place to work.  Previous winners, Mary Couzin (2011) and Kathleen McHugh (2012) and I voted unanimously for Mr. Lam as an exemplar of what is best in a business leader:  Vision, courage, resilience, empathy and a social conscience.

L.T. began his toy career in post World War II Hong Kong where his vibrant personality and powerful ability to communicate (still with him today) led him into the toy business where he became the first person to make plastic toys in China.  In order to accomplish the task, he helped develop a foot powered plastic extrusion machine.  L. T. went on to open more factories in Hong Kong and was the first to return to China in 1976 when that country eased restrictions on private enterprise and outside investment.

If you look closely at the history of the post-war toy industry you will find L.T. constantly popping up.  Whether it was inventing the Rubber Duckie; creating clothes for Barbie’s German predecessor, Lili or producing Play-Doh and Transformers.

L.T. has been and is a major benefactor.  He endowed the LT Lam Research Awards at Cornell University and financed education for Chinese low income children.  He has established a library and has funded the L. T. Lam Training and Research Centre at the Guangdong Toys Association; an organization which works with young Chinese children who are interested in entering the toy industry. In recent years, including 2013, L. T. has worked to create new relationships and understanding between the western toy industry leaders and those in Hong Kong.  It is for his hard work; passion and wonderful, wonderful heart that we honor L. T. Lam as our 2013 Global Toy News Person of the Year.