Last year prior to the holidays I got a request from my sister asking me to help her decide on the right tablet for her then 11 year old son.  I diligently did the research and even though I’ve been in the tech industry and an early adopter of technology all of my life – I found the task daunting.  No wonder she wanted me to do this for her!  There are so many options out there these days – and many round-ups of what’s available.  Everything from the slightly ruggedized for small kids Nabi tablets[1], to the latest iPad air (which can cost up to $929) – the choices are seemingly endless especially when you consider that at some of these prices, parents are likely also considering netbooks or even full on laptops.

So what’s a parent to do – besides calling in their tech savvy sisters?  We thought that exploring the process of one SF couple might help you on your own journey of deciding which technology is right for your kid.

Melissa and her husband John Lamming are SF residents with four beautiful kids, Avalon, who is 7 will be 8 on New Year’s Eve, Caspian, who is 6, Arcadia, 4 and baby Cyprian, who turned 2 on Thanksgiving day.  Melissa and John had bought the three older kids Nabi tablets in the past and since the family Mac was on it’s way out – they knew they wanted each child to have her and his own tablet under the tree this year.    I caught up with Melissa and John to get their take on the arduous journey of deciding which tablet for which child: 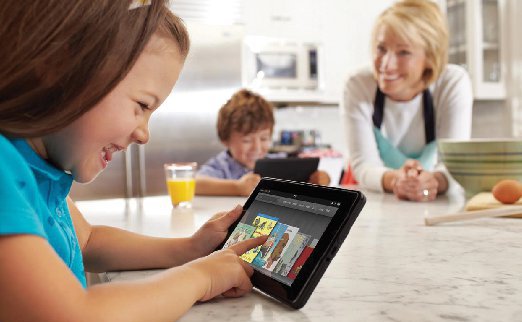 Tablets for the Kids

As told by Melissa and John Lamming:

It took a bit of thought, but we’ve decided what the Big Toys will be for the kids this Christmas. A couple of years ago, we got them Nabi tablets, all of which were big hits, but all of which are also now toast.

So this year, we’re getting them smart devices, and here’s how we went about it:

First, we decided what we didn’t want:

Smart devices come in a number of different sizes, and they won’t all fit our kids’ needs.

Phone-size: The kids will mostly be using these to watch shows, listen to music, play games, and take pictures, and the fact is that when it comes to screen size, bigger is pretty much always better. Phone-size devices are out.

7” tablets: 7” screens are probably about the right size for the kids to play with. 7” tablets are definitely still on the table.

8-11” tablets: While this is a bit big for their small hands, I’m not taking it off the table quite yet. Larger tablets are still in the running too.

Laptops: The two older kids have been playing with Mom’s and Dad’s laptops for well over a year now. Laptops are definitely in the running.

Larger computers: The problem with a larger, more powerful computer is that it’s not portable. The kids like to play with their toys in different rooms, and I’m hoping they get some use out of them on our holiday road trip. Towers and iMacs are out.

So now that we know we want a tablet or a laptop, we’re ready to look at what operating system(s) we’re interested in.

Windows: The gold standard in computing, Microsoft devices can run pretty much any apps and games you want. The only reservation I have is that sometimes Microsoft releases devices that don’t run the full Windows OS. I know it’s just for the kids, but I’m not prepared to shell out top dollar for nerfed/RT version of Windows. Full Windows is on the table, and I’m willing to consider Windows RT if the price is right.

iOS: iOS is great for kids. Simple, elegant, and easy to use. Apple products are pricey, but if we can find one at the right price, they are still on the table.

Android: Android is not my favorite OS – it’s fragmented and not terribly efficient. But it has a great selection of apps, and solid browser options. Google devices are still on the table.

BlackBerry: While I love RIM’s engineering, product design, and security protocols, they just don’t have all the apps the kids are going to want. BlackBerry is out.

So we’ve narrowed it down to a Windows, iOS, or Android tablet or laptop. Here is where the rubber meets the road.  Buying toys for four kids can easily break the bank, and we’re determined to do it for less than a thousand dollars. That means we’ll need to keep the prices in the $100-300 range.

So, based on the criteria above, we created a list of possible devices:

Tablets: Two tablets made the cut: The 16 GB wifi-only Nexus 7, and the Nabi line of tablets. Other tablets were nice, but too expensive for our purposes.

Laptops: While most laptops were too expensive, we did find three Chromebooks for under $300.

Once we had narrowed down the list, we were ready to assign devices.

Avalon (8): While we initially thought Avalon would prefer a tablet, some sneaky questioning revealed that she would prefer something with a keyboard and a bigger screen. After comparing specs and pricing, we decided that Avalon is getting the Samsung Chromebook. The Acer C7 is cheaper, but the specs and battery life on the Samsung are worth the extra $50.

Caspian (6): Caspian is big on games, but not using computers for any serious writing or browsing yet. Caspian is getting the Nexus 7, which will give him flexibility, and something to grow into.

Arcadia (4): Arcadia likes games too, but we get the sense she will be overwhelmed by something as complex as the Nexus 7. After looking at the options and specs, we’ve decided to get her the Disney version of the Nabi 2. (She’s a big fan of the whole princess thing.)

Cyprian (2): While Cyprian likes electronics, he’s not going to get much out of something too complicated. He’s going to love the Nabi Jr.

So there you have it – we’ll be getting our kids the electronic devices of their dreams, for less than a grand.