In a recent issue of Automation World there is an editorial piece on “The Future of Manufacturing: Industry 4.0”. They report that particularly in Germany, where industry is a key part of the economy, there is a widespread conversation about what they are calling Industry 4.0. 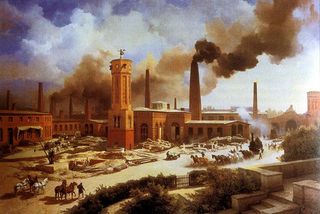 The handcrafted production of the 18th century was Industry 1.0, giving way to the Industrial Revolution during which steam and water power replaced tasks formerly done by hand. This was Industry 2.0 and later led to our modern and familiar world of mass production powered by electricity, characterized as Industry 3.0.

The writers of Automation World envision that we are at the advent of Industry 4.0, and are, with the help of a think tank, employed for just this purpose, attempting to define what Industry 4.0 will look like, and consist of.

We may be on the cusp of Toys 4.0 – at the advent of the future of toys and play.

Toys 1.0 might be defined as those pre-War toys, made from wood and metal, lithographed tin, largely handcrafted, and manufactured in Japan and Europe. Toys 2.0 would be those from the dawn of the plastic era of toys, post WWII, often powered by clockwork and wind up motors.

Toys 3.0 is comprised of our modern toys and games, manufactured in China, from an industry dominated by large multi-national toy companies. These modern toys are often electrically powered by batteries and largely controlled by microprocessors.

What will be the new form and function of toys? Major changes have occurred in the past in the toy industry and all other industries, as well. Change is a constant.

From that we may be safe in concluding that major industry-wide change will come again in toys and games. Certainly the advent of tablet and smartphone-based play and app-based toys and games may be one indication that we are peering out at the horizon of Toys 4.0.

I don’t have the answer, anymore than Germany has defined what Industry 4.0 will be.

They are right, I believe, in trying to be at the leading edge of defining it, and thereby being in the position of inventing it, rather than trying to catch up to the leaders from the trailing edge of change. Will Toys 4.0 be defined by a new material, as plastic supplanted printed tin plate metal, steel, and wood?

Will it be a new mode of power as electric motors/lights replaced spring wound toys, or will it be some new technology allowing new play patterns much as the microprocessor has enabled the creation of many new types of toys and games?