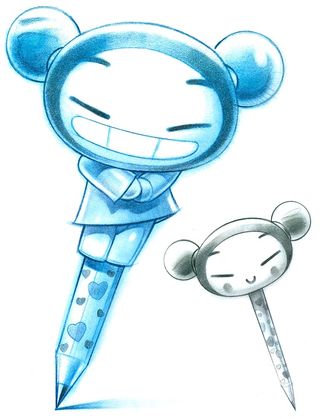 The face, of course, holds most of the acting in terms of
character personality so you need to really nail those features. It is said the
eyes are the light of the soul so they will make or break the emotional impact
of your sketch.

A world-renowned portrait artist once said the mouth is what
gives the full likeness of the person and not the eyes or nose. I personally
think that it is a combination of all three—eyes, nose and mouth that need to
be nailed for proper accuracy. If one or more of those three key facial details
are out of whack, it’s game over.

So, rough out the pose and the facial mannerisms as much as
needed to nail those key components. Russian painters often refer to them as
“the triangle” because the eyes, nose and mouth form the person’s individual
identity and are interwoven into one united form factor.

Once those key areas accurately depict the likeness and
cuteness of the licensed character, then and only then, do you finalize the
sketch and move on to the next stages of design.

Be the character—get under his or her skin. This will not
only help you capture their essence but also help you imagine the best internal
toy mechs that give us play patterns most suited to the character’s
personality. Even if the design is as simple as a pencil topper, the characters
still need to convey the personal characteristics that define them.