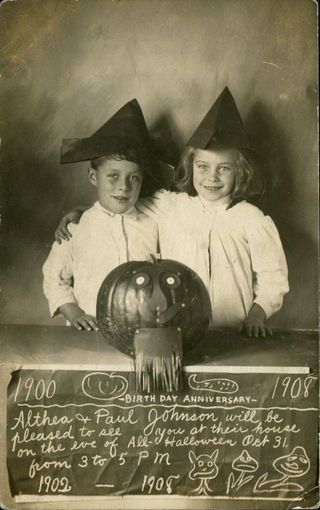 Carving Jack-O’-Lanterns originated centuries ago from the Irish myth “Stingy Jack.” The story goes that Jack invited the Devil to join him for a brew. After the pair enjoyed their spirits, Jack realized he could not afford the bill. He persuaded the Devil to turn himself into a coin that Jack would use to pay off their debts. The Devil reluctantly transformed into a coin. Instead of paying the barkeep, Jack kept the money. He slipped the coin into his pocket alongside a silver cross, and the presence of another spirit prevented the Devil from escaping. When Jack passed away, he had proved no friend of the Devil. The Devil condemned Jack to an eternity of roaming the earth. To light the way, the Devil gave Jack a single, carved turnip that held a burning coal, and the Irish referred to the image of Jack roaming the earth as “Jack of the Lantern.” Believers began to carve their own interpretations of Jack into turnips, potatoes, large beets, and eventually into pumpkins and to place their creations in windows to frighten away evil spirits.

Today, pumpkin enthusiasts continue to make an art of carving their favorite gourd. Shops carry an assortment of pumpkin carving accessories. Some people buy print patterns for The Creature from the Black Lagoon or Frankenstein. Other carvers use wood gouges and mini saws to craft intricate designs in a pumpkin. The Strong’s collections have an assortment of fun pumpkin carving supplies. One of my favorites is the Halloween-themed extension of Mr. Potato Head. Back in 1950, model maker George Lerner first fashioned eyes, ears, mouths, noses, and other body parts of molded plastic, each with a sharp prong to stick a piece of fruit or vegetable. Lerner sold his idea to a cereal company that planned to offer the facial parts as a premium in its product packaging. The Hassenfelds of Hasbro recognized a winning toy in Lerner’s Mr. Potato Head and gave the cereal company $2,000 to stop production. Hasbro then set to production. The first Mr. Potato Head, issued in 1952, came with 28 face pieces—children had to supply their own potato. By 1962, enough parents had complained of the stench of rotting spuds (left haphazardly around the house) to prompt Hasbro to supply a plastic potato with its play sets. A plastic Cooky the Cucumber, Oscar the Orange, Pete the Pepper, and others followed the plastic potato. Mrs. Potato Head, a son Spud, and a daughter Yam also joined Mr. Potato Head. Eventually Halloween-themed sets provided parts for children to decorate a real pumpkin as a pirate, princess, witch, vampire, and other ghoulish creatures. These are safe ways for children to engage in creative play and tradition.