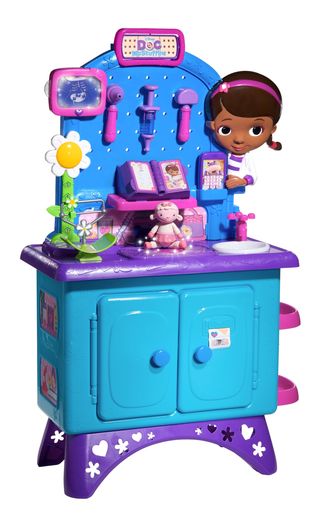 Hoping to improve this year's already $700 million sales
shortfall, toymakers are gearing up with big plans for the fourth quarter armed
with products recently exhibited at TheTimetoPlayMag.com Holiday Showcase.

Characterized
as "a tough year" so far by the magazine's ceo and editor-in-chief
Jim Silver, toymakers have been challenged by lagging sales at the box office,
a soft spring/summer selling season, and looking ahead, six less days for
holiday shopping and an early Hanukkah.

Interestingly,
infuriated shoppers slammed Kmart on its Facebook page when it launched its Christmas
campaign more than 100 days before the holiday to get a jump on the
competition. Keeping the momentum going, the retailer created its Fab 15 list featuring
its top picks for the holiday season including an exclusive 2013 Barbie Collector
Auburn Hair Holiday Doll.

Not to be
outdone, Walmart turned to 1,000 kids (ages 18 months to 10 years old) when
developing its "Chosen by Kids" top toy list for classic and new
toys. The top 20 toys will be grouped together throughout the season in special
in-store displays, on Walmart.com and in newspaper circulars around the
country.

Toys
"R" Us also announced aggressive plans including a loyalty program
where members can earn up to 10% back, up to 100%, on qualifying toy purchases
through October 31. An e-gift card will be delivered in November allowing them
to complete their holiday shopping. Its return policy has also been extended
through January 25.

Now
that retailers have set the stage for the all-important holiday season, let's
see what will be filling shopping carts in the weeks ahead.

Mattel's
Monster High will definitely scare up interest with its 13 Wishes Doll
Assortment with two new friends Gigi Grant (daughter of a genie) and
Twyla (daughter of the Boogie Man). Each
doll comes with a pet, diary, brush, doll stand and character-specific
accessories. 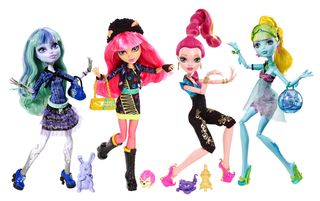 Toys "R"
Us and Justice already committed to The Beatrix Girls, a brand new collection
of four pop star dolls that will allow girls to collect original music, join
their fan club and vicariously live the fantasy of being a pop star through
play.

Also new is
Pinkie Cooper and the Jet Set Pets from Bridge Direct which lets girls follow
the adventures of Pinkie and friends Ginger Jones and Pepper Parson via a blog
Pinkie Post. The line also includes a collection of pets and fashion
accessories.

Fairytale
characters in a modern day high school setting is the backdrop for Fairy Tale
High with teenage Snow White, Rapunzel, Belle, Sleeping Beauty, Little Mermaid,
Alice in Wonderland, Tinker Bell and Cinderella brought to life as they might
have been before they became fairy tale princesses. A series of webisodes and eBooks will showcase each
character's teenage story. On the
entertainment front, kids TV favorites Doc McStuffins, Disney's Sofia the
First, Chuggington and Teenage Mutant Ninja Turtles are sure to generate foot
traffic. Look out for Doc McStuffins Get Better Checkup Center from Just Play
as one to watch as well as the Talking Magical Amulet from Jakks Pacific and
the Chuggington StackTrack line from TOMY with playsets that lets kids build
tall, spiraling layouts. Two movie standouts "Despicable Me
2" and "Planes" will get play on retail shelves with Thinkway
Toys creating several exclusives for Toys "R" Us including talking GRU,
Agnes, Dave and Stuart as well as talking minions available in multiple
channels. For "Planes," the company creates Talking U-Command Dusty,
a remote controlled plane with sound effects.

Nestled
alongside some traditional toys will no doubt be technology-driven products
such as tablets. Category leader LeapFrog Enterprises, Inc. debuts the LeapPad
Ultra with more memory, a bigger 7-inch screen, peer-to-peer play and a library
of more than 800 interactive educational games, creativity apps, eBooks and videos. Sharing
the spotlight will be the VTech Kid Connect2 communication app for the InnoTab 3S. The new app allows kids to
be connected with their parents and friends through both tablet-to-mobile and
tablet-to-tablet communication. TechnoSource
also showed off its new Kurio Android devices for families with kids including
the Kurio 7S, Kurio 10S and Kurio Touch. The Kurio 7s and 10s contain a pre-school
through 6th grade learning system as well as apps from Disney/Pixar's Cars 2,
Disney Princess and Marvel's The Avengers.

WowWee with
RoboMe, a fully customizable robot that features Telepresence (kids see what it
sees and hears) when used in conjunction with an iOS smart device. The cute factor is
kicked into high gear with Fisher-Price's Skate & Spin Dora & Boots
with the two Nick faves skating side-by-side, doing spins or skating in a conga
line.

Goliath Games puts an
interesting spin on game play with HolograFX which allows children to create
holographic images with the use of hologram theater, magician-quality illusions
and an app.

Iron Man fans will be able to send their own
superhero soaring through the air at incredible distances of over 200 feet with
the new RC Extreme Hero from EB Brands.

Big
hugs will be delivered with Hasbro's Big Hugs Elmo, a 22-inch lifelike interactive Elmo
with flexible arms and a soft head. Furby Boom which combines physical and
digital play and the ability to hatch digital Furbling friends is another one
to watch. The free app will be available for download at the App Store and
Google Play.

Some battery-free fun for preschoolers includes Magic Fun Dough
from Rose Art with six theme kids: three each for boys and girls. The dough is
formulated to absorb colored transfers without changing the color or texture of the dough, making the dough last for
endless creative play.

I'm really excited about all the new and interesting products that will fill shopping carts in the weeks ahead and hopefully fill kids hearts with a lot of joy!