Anna Van Slee of Otherdoor Entertainment & Manifest Digital:
has
been aiding and abetting the success of global kids' entertainment
brands such as Furby, Transformers and My Little Pony for the last 6
years. Her expertise ranges from branding and intellectual property
development, to cross-platform marketing and product development. Anna
holds a Master degree in New Media from Northwestern University, which
means in student loan terms, her brain is the equivalent of a luxury
automobile. Good thing brains don't depreciate! Anna also directs the
playCHIC Fashion Show, which kicks off ChiTAG Week in Chicago. She is
currently co-writing a book that teaches experience design to beginners
through activities and games. It's called "Adventures in Experience
Design" and will be available through Peach Pit Press this December. 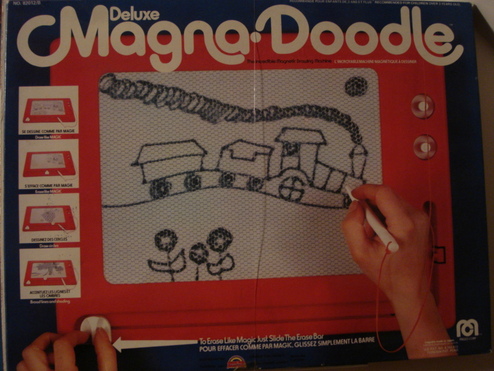 Marty
Abrams has a voice that makes you want to listen to him talk. It's like
the East Coast driving a Monster Truck. Equal parts Tom Waits and
skyscrapers. At first, it's difficult for me to pay attention to what
he's actually saying because I'm distracted by trying to think of a way
to describe his voice. But then our trains of thought collide, as he
sums up what his voice sounds like in one sentence: "I've been doing
this an awful long time."

He's
talking about creating toys and games. Marty's been in the toy business
since he graduated from New York University in 1964, which is a
long time – for any profession. But inventing is unique. Toy and game
makers have to be constantly re-inventing their product, which requires
an unusual amount of self re-invention, too. "Enthusiasm is what it's
all about. You have to be at least contemporary with today's
7-year-old," Marty explains. "You have to evaluate every idea: How does
it speak to a kid? It's a 24/7 run at it. You can't do this half-assed."

By
his voice alone, you can tell Marty Abrams doesn't do anything
half-assed. So, for someone that has had his whole ass in the toy biz
for more than 4 decades – 24/7 – well, that's tiring to even think
about. No doubt, this is why Marty begins our conversation talking about
his retirement. "In 2010, I retired," he says. "I thought I was
done." If he really was done in 2010, this still would have been a great
interview, with a man who had an amazing career in toys. But Marty was
not done in 2010, and so he hasn't had just a career in toys. He's had
(having!) a life dedicated to toys. It
is pretty much impossible not to learn something from someone like that
during the course of a conversation. I'd like to share with you a couple
lessons I learned during a brief interview with the legendary toymaker
Marty Abrams. "When
I first broke into the biz, there was no welcome comity that said 'Gee
Marty, we're happy to see you'," Marty says, with a rough chuckle. When
he entered the toy biz there was a fierce battle for market share going
on between Mattel, Kenner, Hasbro, Coleco, and others. After he
graduated from college, Marty joined Mego International, his family
business. At the time, it was ranked 300th among toy manufacturers
worldwide. During his tenure, Marty would meteorically rise Mego to sit
among the 10 top toymakers worldwide, and create some historic products
in the process.

Marty started out working on Action Jackson
and several other boys action figures. But then he said to himself:
"We're doing all this stuff in boys, but there's lots of girls' stuff to
be had." Seems like a simple observation, right? Easier said than done.
But the first lesson I learned from Marty is: Focus on the consumer,
not the competition. Marty dove head-first into the girls' category.
Even though he was a newcomer to the space (or maybe because he was),
and despite going up against Barbie, the 300lb pink gorilla in the
girls' aisle, Marty saw an opportunity. "The first thing we did was get
the Wizard of Oz license," Mary says. "The dolls sold like hot cakes!"
He explains that, unlike films in the theater, the Wizard of Oz would
would play several times a year on the TV. "It was one of the top ten
movies ever played at the time," he adds. The license tapped into a
beloved story, and consumers found room in the hearts, and dollars in
their wallets, for the Wizard of Oz dolls.

But the real genius
behind the Wizard of Oz line was the concept of the license itself. "We
were the first ones to create [celebrity] personalities for dolls,"
Marty says. "Personifications of real people." Next came the Farrah
Fawcett doll. "[She was] the biggest star in the world at the time!"
Marty says. "When it comes to the girls' side [of toys], the
personalities were key. We had great success with it. We were the first
to do it. And we could do it because we had our own distribution." Marty
had learned something else along the way. Something I can now share
with you, but I'll let Marty tell it in his own words: "If we went to a
big guy, they wouldn't do it because in their mind it fractures and
harms their current hold on that biz." Lesson No. 2: If you want it done
right – or at all – do it yourself.

That
DIY lesson applies to everything Marty touches – from distribution, to
product, to even how products are developed. Products like the
mega-hit Magna Doodle. "I walk into Pilot Pen – I can remember it like
it was yesterday – and they were working on this toy with magnetic ink,"
Marty recalls. "You could draw on a screen. And I said: Great, let's go
do this! And they said: We can't do this. And I said: Why not? Well,
they can't manufacture it because they can't seal the screen. If it gets
wet, it ruins it." Marty wasn't about to let that stop him. "We built
the first 'clean room' where we could manufacture the Magna Doodle,"
Marty says. "We spent well over a million dollars to do this." That
investment paid off. More than 40 million units have been sold
worldwide, to date, since its invention in 1974. How
does Marty know where to place his bets? Where to take chances? The
most coveted lesson of all: What are the criteria for a master
inventor's creations? Marty likes to call these
products "mind-changers." Not game changers. "Look for something that
shifts the bigger picture, changes how people think," he advises. He has
no shortage of examples to share. "2-XL – in 1977, Play Things magazine
considered it one of the ten greatest toys ever built," Marty says. "It
was a robot you could talk back and forth to. Before then, nothing like
that ever existed." But that novelty wasn't enough to make it a
mind-changer. "The key to that was creating a personality for the
robot," Marty says. "If you made a mistake, it would insult you, and so
on – but all in good jest. Done with 8-track tapes. Very archaic
compared with what you do today." But a mind-changer nonetheless. Marty
can also take credit for being the first toymaker to product credit
card-sized handheld games, and the Power Glove, the industry's first
augmented viral reality product.

For
most people, this would have been enough success. It certainly took
enough of Marty's energy to make him retire… for a while. But then
along came Fireflyz. "I retired. I thought I was done… But then there
was this new item," Marty says. "We thought rather than license it,
let's do it ourselves because licensing will take two years to come to
the market, but personally we can turn around and do it right away." And
sold it they did - 4 million pieces. Marty modestly says, "We didn't
make a whole lot of money, but enough to turn around and take it to the
next step - International distribution." And just like that he was back
in the game, putting to work all the lessons he'd shared with me – and
more. Marty is focused on consumers. On making mind-changing products.
And on bringing those products to market his own way. Which left me with
just one question. Where does he get all this energy to keep creating?

"It
never ends, for me – inspiration comes from everywhere," Marty says. He
read (no joke) 8-9 hours a day.  "I get energy from the most eclectic,
off-the-wall stuff," he says. "From walking the streets of NY, to
traveling to Africa with my grandson. I take pieces of inspiration from
everywhere, every day. It's 100% devotion. When I retired, I didn't know
I could have the same dedication I had in my 30s… and here I am." I
can't wait to hear what his voice will sound like after the next dozen
inventions.