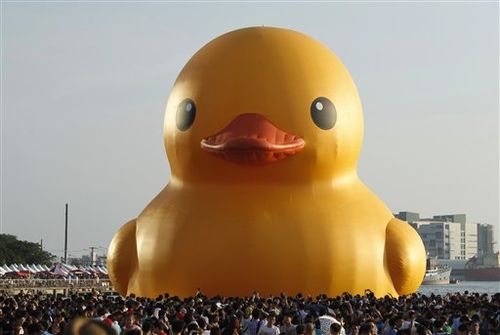 “This is a fine art event, not a toy
event. The artist appropriated a toys image yes,but to try to push some sort
of capitalistic tag along to the event would be missing the point.”

Brett Klisch – Product designer and developer; in response to my posting “World Largest Rubber Ducky Arrives in U.S.;
shouldn’t we be celebrating?”

I recently posted a piece entitled:  “World Largest Rubber Ducky Arrives in U.S.;
shouldn’t we be celebrating?”  A 40 foot
rubber ducky (designed by Florentijn
Hofman  and about the size of a six story building) was towed
into Pittsburgh via the Ohio River; its a floating art installation.  My perspective was that the jumbo artwork
is right in alignment with the spirit of those who originally created the
rubber ducky (L.T. Lam) as well as those who have utilized it as an element in music commerce (Sesame
Street “Rubber Ducky” song) as well as those who have used it in toy commerce
(Celebriducks).  As such, it should be
celebrated by the toy industry, and yes, used as a way to create commerce and
prosperity for those who make and market play.

Brett Klisch, an artist in his own right as
well as a toy designer, expressed concern regarding the commercialization of a
piece of art.  Here is how he put
it in his comment to Global Toy News:  “This is a fine art event, not a toy
event. The artist appropriated a toys image yes, but to try to push some sort
of capitalistic tag along to the event would be missing the point.”

I know Brett and both value as well as thank him for expressing
his perspective.  His comment caused me
to think about art and commerce vies-a-vies the toy industry.  Why, because I  am fascinated by and have written about the
relationship between art and toys.  Here
are just a few examples:

“The
Other Toy Story;” art from forgotten toys

The
Art of the Toy and the Toy of the Art; An Art Critic Has
His Say

Toys
as Art; the work of M.ScHoRR

So, after some thought, I have to say that I don’t completely agree
with Brett.  Here is why:

Artists and musicians repurpose the work of others all the time.  The rubber ducky was not self-created.  Rather it was the creation of a person,the aforementioned  LT Lam.  In other words, Mr. Hofman appropriated the work of Mr. Lam.  Mr. Hofman in turn gets paid for his work.  It seems only logical and fair that the appropriation of someone else's creation for economic gain, even if it is art, should lead to a continued apporpriation by others.

In addition, there is a history of cross-over between art and
commerce.  Consider Paul Budnitz (Kid
Robot) and Michael Lau who are thought to be the progenitors of the “Urban Vinyl"
aka “Designer Toy” movement.  Here is how Wikipedia describes Designer Toys:"…Toys and
other collectibles produced in limited
editions (as few as 10 or as many as 2000 pieces) and created by artists
and designers… Creators of designer toys usually have backgrounds in graphic
design, illustration or self-described low brow art; some are classically trained
in art and design, while others are self-taught."

Both artists have been recognized by the art community
with Budnitz having pieces displayed in the Museum of Modern Art and Lau having
been presented with four awards by the Philippe Charriol Foundation.

“The Kobe Frog is a 10 meter high sculpture on the roof of the Hyogo
Prefectural Museum of Art in Kobe made by Tadao Ando. The museum was build (sic)
on the site which was stroke by the earthquake in 1995. The frog wears a
partyhat (sic) and is sitting on the edge. The work is about enjoying life and
being flexible in times of nature disasters, danger and stress.” 
“InflatableTemporary site specific work inspired by the city of Strasbourg,
it's culture and the location.

Can be seen at the Arte headquarters untill (sic) the end of december (sic).” “A solo show inspired by the toys and (cuddle)sculptures of children, where the
change of scale completely changes their function and feeling.”