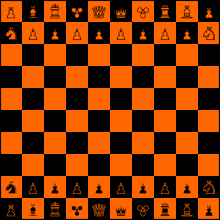 A Martian Chessboard by Edgar Rice Burroughs.  It consists of 10 x 10 squares

rather than the Earthly 8 x 8.

If you are in the toy and game industry, it is very
possible that someone at sometime has approached you with yet another variation
or improviement on the Chess or Checker board.  My first
experience with it was early in my career I met a psychology professor, a Dr. Groman,
who had invented games called Hyper Chess and Hyper Checkers.  As I recall now, they involved the use of
color and the “squares” were hexagonal.

He had attempted to get it published but was frustrated
by a lack of interest.  I was new in my
career and could really do little to help him except value the intelligence,
work and passion he had put into creating his game.  Little did I know then that he was one of a
legion of people who have attempted over the years to “improve” what is
considered to be one of the world’s most perfect games.

The evolution of the board, 8 x 8 squares, dates from 6th
century India.  It’s a bit difficult to
determine whether it was developed with the original game and indeed some early
chess was played on the lines and corners rather than the squares (think “Go”).

Since then, with the exception of some color changes from
black and white to red and black squares, the board has stayed the same and
served as a platform for a plethora of games including Jetan* i.e. Martian
Chess (thank you Edgar Rice Burroughs).

What is it about the Chessboard that makes it
impenetrable to change?  Is it the
mathematical perfection of the 8 x 8 board; complacency or just being too much
of a classic?  I would be interested in
your opinion on why the 8 x 8 checker squared board has not evolved.  Let us know what you think?

*According to Wikipedia, Jetan was played on a 10 x 10
board with the following:

This is equivalent to three moves of a chess king, except
that it cannot double back and may only capture at the third step.

It may make one "escape" per game, jumping to any
unoccupied space on the board.

Per Burroughs, in an older version of Jetan these pieces
were called Odwars.