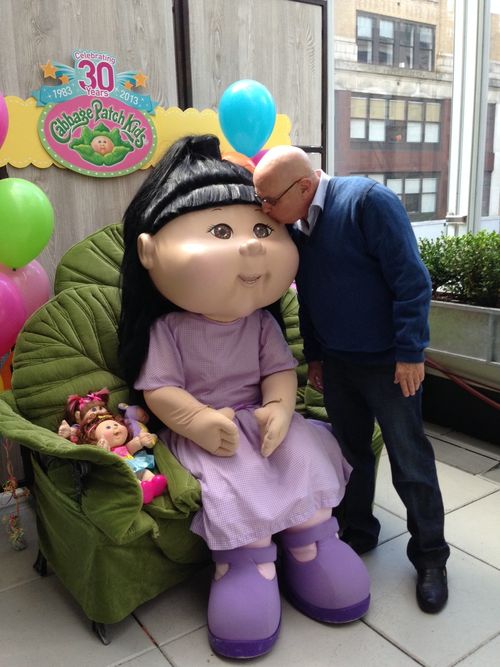 I had the pleasure of attending a 30th
birthday celebration for the Cabbage Patch Kids.  JAKKS
Pacific and its team did a great job of showcasing a milestone product in
the history of the doll and greater toy industries.

After kissing a bigger than life
Cabbage Patch Kid on the cheek, I took a look at the history of the line.  As I reviewed the various dolls from different ponts in time; it
hit me that, in many ways, Cabbage Patch kids were a precursor to today’s increasingly post
gender / post racial identity toy industry.

Let me explain:
Products like Bratz, Monster High and Ugly Dolls exemplify products that
are racially ambiguous.  Look at a Bratz
doll and you will see  yourself.  That Asian hair, Hispanic complexion, African
lips and Caucasian eyes allow any little girl to find something of  herself lurking in the doll’s face.  Monster High, with its unusual skin tones and
scary, beautiful faces as well as Ugly Dolls which are like nothing ever seen
on earth allow children and their parents to bypass the whole racial indentity
issue.

Like the above examples, Cabbage Patch Kids over-ride issues
of race with looks that are more about being homely / cute than anything else.  Yes, there are different skin tones but they
seem irrelevant compared to the unusual faces and plump bodies.

And that’s not all.
They’re “kids” and not “dolls.”  Something
I was immediately reminded of at the party.
(Don’t say “doll” at a Cabbage Patch event).   By
avoiding the word “doll” they Cabbage Patch Kids were able to provide comfort
and delight without telling parents and children that they were for girls
only.  That’s why some boys like Cabbage
Patch as well.

So, bottom line, we all have a lot to learn from a product that
was more than a fad.  It was a precursor
to the world in which we now live.  Happy
Birthday Cabbage Patch Kids.  You’ve come
a long way baby.