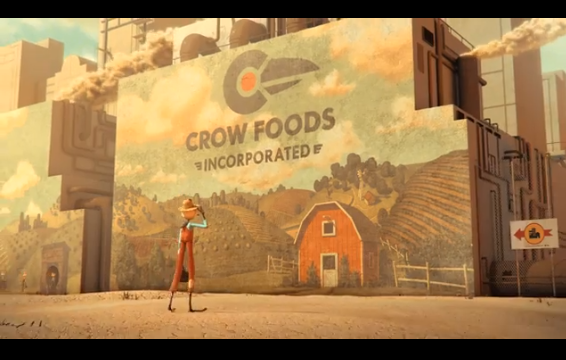 Launched nationally on September 12, Chipotle's The Scarecrow animation and app game mark a new step in the playification of industries outside toys. The Pixar-quality animated short, released on YouTube rather than broadcast as a commercial, continues Chipotle's authentic advertising philosophy, one which recognizes that Millenials "are skeptical of brands that perpetuate themselves."

The Scarecrow short film was digitally animated by Moonbot Studios and features a Fiona Apple cover of the song "Pure Imagination" from Willy Wonka and the Chocolate Factory that would fit nicely alongside Danny Elfman's most epic and somber works.

In the toon, an emo scarecrow reports to work at a food production factory where he must spend his day watching his coworkers and squawking (Tim) Burtonian automated helicopter crows cover up the monstrosity of their genetics-bending methods and the overall appalling quality of food processing. Finally done with his day, Scarecrow heads home to his distant farmhouse. He decides to pick some Chipotle peppers and other ingredients and quickly is back in the city serving up meals from a table between buildings.

Media outlets like the huffington Post are deeming the film heavy handed, and that may be true, but only in the same way that Disney and pixar's Up and Toy Story are heavy handed. Tugging at audience heart strings with this high quality of content seems admissible if not entirely admirable.

But The Scarecrow film is merely a preamble to the richly conceived and pretty darn fun mobile app game. Since parting ways with majority owner McDonald's, the Mexican food leader has further committed to its more egalitarian efforts, such as abolition of genetically altered foods in its restaurants. Chipotle might merely be the healthiest of choices in fast food, but makes a valuable ally for the play industries.

How long have toys and games been associated with McDonald's and other more morally debatable fast food giants? I for one will trade the obesity champ for the natural foods advocate. How can we work more with Chipotle and similar companies to associate play with other positive life choices?