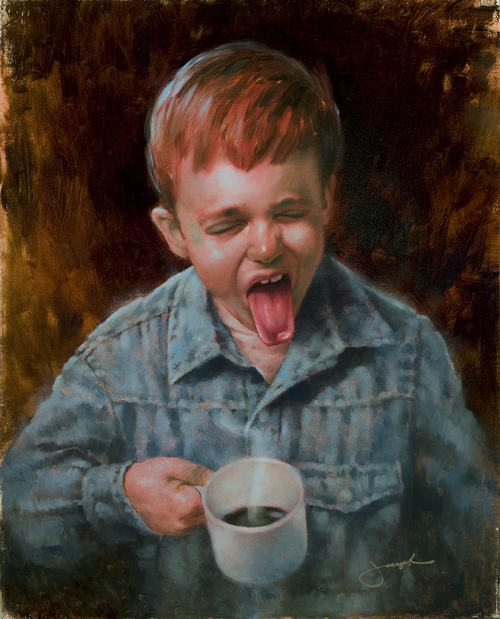 The teacher, who would later become a dear friend, actually
taught our little rag tag group of bright-eyed students that color has value—literally.
Each color we would ever mix would not be right unless the tonal value was
right. Color, in reality is made up of tonal values and the two go
intrinsically together.

Once we figured that out we were able to paint that lonely
egg, which seemed simple but was actually a nightmare without the proper
knowledge of tonal value. Once you master the egg you can move on to the human head,
which is really just a bigger egg with more surface detail. Ah, so that teacher
wasn’t so nutty after all. All Color Falls Within Tonal Bands As Directed By Light

You see, every object has it’s own unique local (overall) hue
which is affected by the light that illuminates it and the shadow pattern that
gives it form. Technically, the area of light has a different color temperature
(warm/cool) and tonal values than it’s opposing shadow variant—that’s key to
strong concept art.

The professor was fond of telling us that if our renderings
continued to look wrong we would at least be able to cook the egg to put food
on the table—that man was a motivational speaker. Looking back I now realize
that those who grasped the secret of color having value would go on to achieve
success as professional designers in various fields including industrial
design, film and even the toy industry.

It takes a while, but once you understand that color falls
within bands of tonal value—you’ll know why color loses the
three-dimensional form and looks wrong without the right value. Knowing this
gives your ideation art the edge it needs to convey your golden idea with the
emotional impact it deserves.

So, take a look at my painting samples in part one and two
of this article to compare the color versions next to the tonal versions. This should
help show that color doesn’t really create the three-dimensional form all by
itself but needs a little help from it’s friend—tonal values. You just can’t
have one without the other, kind of like ebony and ivory—but I digress.

You’ll also notice I only mixed five tonal values, which is
detailed in an older post I wrote for Global Toy News. I recommend you read
that again to really understand the full scope of color having value. These two
articles will help answer many of he emails and Facebook questions I have been
recieving.