"Animation
follows the laws of physics — unless it is funnier otherwise." 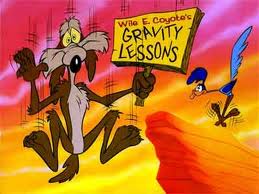 Modern childhood has, for most of the last 100 years or so, been divided between cartoon physics
and real world physics.  Cartoon Physics
applies to, of course cartoons, but also to any medium in which the laws of physics
divert from the ones we know in real life.
The use of Cartoon Physics is the source of fun for children and
adults.   It is the use of physics in
toys, however, that though a lot of fun, teaches the fundamental laws of how the world works.

Two examples of the use of Cartoon Physics are The Three Stooges and Sylvester the Cat.  For example, we know that one of the Three Stooges can hit another Stooge in the head with a hammer
and though it will hurt him it will do no lasting damage.  He is fine seconds later.  In the same way, we know that Sylvester the
Cat will have his fur blown off and in the next frame he will be back to his old furry
self.

I was thinking about Cartoon Physics the other day when
trying to help a friend solve a security problem.  I suggested the use of an anvil which
resulted in a look of perplexity morphing to amusement and then dismissal.  OK, it wasn’t a great proposal but it was the
best I had at the moment.

Physical toys, unlike Slvester or Moe, Larry and Curly are governed by the laws of physics.
Watch a child create a tower out of blocks.  If the child makes the tower too high or out of balance it will fall.  Then watch the child repeat the process, this time stacking the blocks so they stay up.  Those blocks just taught that child an important lesson about the mechanics  the physical world.  The neat part is that the child thought she was simply having fun.

In a funny sense, Cartoon Physics also teach us about real world physics.  It is the fact that we laugh at a Coyote getting hit in the head with a safe or a character falling in slow motion that tells us that we intutiviely know that it is not the way the world really works.  Cartoon Physics provide us with the exception that proves the rule.

So, thank you cartoons and thank you toys for teaching us the serious and silly sides of life.  We need both, don't you think?