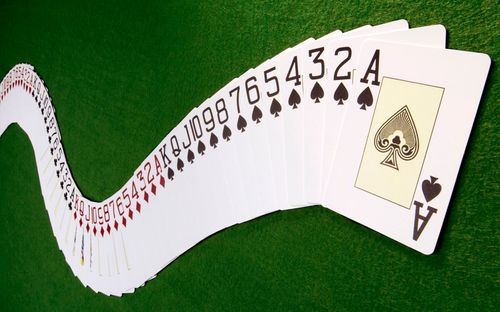 We live in a moment in time in which things
changequickly*.  The gap between
iterations and advancements has moved from millennia to centuries to decades to
years and now moments.  Elements of the
traditional toy industry have evolved but in some cases change has practically stopped.  One such example of glacial change is traditional playing cards;
one of the earliest play platforms.

The history of the playing card can be traced back to 9th
or 10th century China.  They
were essentially dominoes made from paper; interestingly, the use of ivory and
wood evolved later.  Card games were
introduced to western culture in the 14th century by the Moors who
at that time controlled much of modern Spain and Portugal. 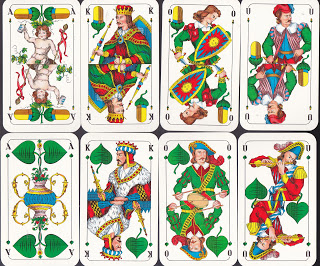 These Islamic cards featured suits comprised of Swords,
Coins, Cups and Sticks.  Spanish cards
today have essentially the same suits.  The
Germans got into the act with their own unique set of suits:  Acorns, Bells, Leaves and Hearts.  It was from France, however that the world
received the familiar Clubs, Spades, Hearts and Diamonds. They were hand
painted and only for the rich.
Interestingly, the next evolution in card games was due to Guttenberg
(kind of ironic that he made both devices for prayer and gambling available to
the masses). 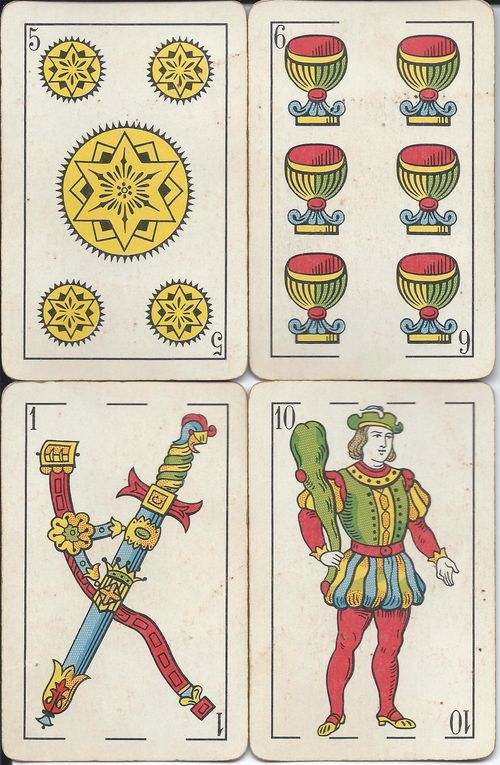 As to the use of royalty, that seemed to evolve as
well.  At one time, cards included the
familiar King and Queen as well as a Knight, a Valet, a Lady and a Maid.  The Germans even did away with the Queen for
a while.  The Joker was late to the
scene, arriving in America in the late 19th century.  The Ace, or the “One” card is believed to have been a product of the French Revolution.  The message being that the people (the lowest
number) are more powerful than the King. Therefore, the Ace beats the King.

By the way, I was surprised to learn that the Kings
featured on the cards actually stood for real kings.

Our familiar deck of cards with numbers in the corners and
upside down images came from the 19th century when someone came up
with the idea (apparently an American) of ending the notion of the upside down
and hence unreadable card.  In addition,
Americans added rounded corners and varnish so they lasted longer.  There must have been a lot of gambling going
on in America for that kind of progress.  In more modern times, card games have been used for
marketing with illustrations for products, people and places depicted on the
backs or incorporated into the suits.

Not a whole lot has happened with cards since the 19th
century.  Isn’t it time that one of the earliest
play platforms speeded up the evolution process just a little?  Shouldn’t we have decks available to us that
allow us to change and even create suits and designs?  Shouldn’t we have specially treated card
stock that allows us to change the appearance of the deck at will?  Isn’t it time for a new card play platform that
incorporates the modern world?

It’s time for a change.
Whose deal is it?

*Nope, not a typo; just a way of expressing how fast
things change.