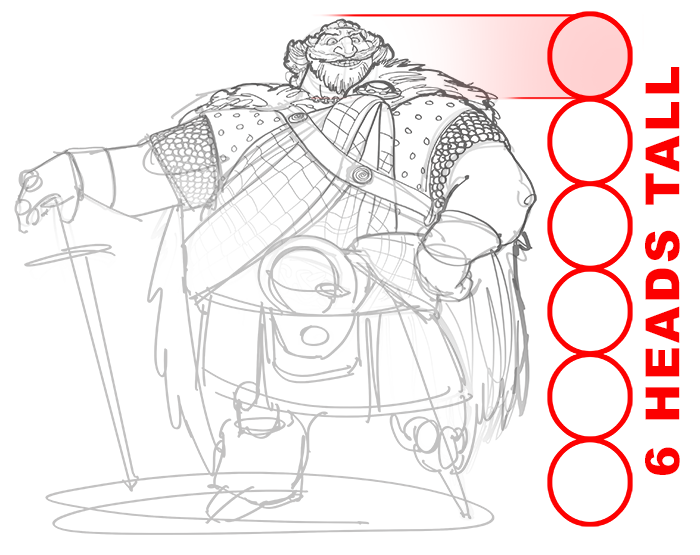 The key to strong concept art is the underlying rough
sketch. This under drawing is a blueprint of the over all forms of the figure
with an emphasis on the major masses and not the smaller details. The point is
to concentrate your effort on building the skeletal structure of your sketch
because everything else will be built on top of that.

For example, when really smart guys with thick glasses and
pencil protectors build a skyscraper, they don’t start by laying the structural
beams over face brick and lighting accents. They build the structure first and
when that get’s the go ahead from guys who have even thicker glasses and two pocket
protectors, the other structural elements are added on top of that.

All of this is, of course, is done in a progressive and
strategic workflow until the entire building is completed—and may I emphasize the light bulbs come last. So, in blocking in your ideation sketch, keep in
mind that if you indicate details too early into the process you are actually
working against yourself and could be in for a rough ride down the road.

I remember during a figure painting session back in my design
school days, a transfer student from accounting decided to buck the procedure meticulously painting the model's freckles before her eyes and nose were even
indicated. The professor stopped dead in his tracks and looked at the student
and then back at the painting and then back again at the student.

Imagine Elmer Fudd fuming at Bugs Bunny as he chomped
blissfully on his carrot. It would have actually been humorous if the whole
class wasn’t frozen like statues watching in stunned silence. Elmer, I mean the
teacher, zeroed in on that poor student with laser like eyes that scared the
rest of us to the point of a washroom break. The student just stood there smiling blissfully from ear to ear proudly stating he had counted twenty-six freckles and hoped to get the rest in by the end of class.

I knew my professor was a really caring human being and was pausing to think of just the right words to say to build this guy up and lead
him in the right academic direction. To my surprise, however, he stood on the tips of
his toes and yelled louder than my childhood memories of my mother when she found out my dad snuck off
for a cold one when grandmother was visiting.

“Get out!” the professor screamed as his hair-challenged head glowed
bright neon red. “Just, get—out!”

Yes, it was the perfect time for a washroom break and we all
bolted toward the door. The only person without the sense to get out of that room
as fast as possible was that student. To this very day his story is spoken
of in faint whispers of warning and dread by the current generation of students in that prestigious
school. To avoid the same tragic end, upon the wall just a few feet away from where that young man stood painting freckles clearly states for all to see in bold Helvetica—no details until the structure is right.