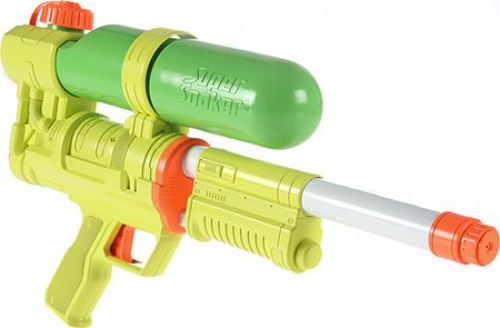 The New York Times Magazine runs a weekly column called “Who
Made That?”  Typically it gives the story behind the invention of things like lipstick, the Bunsen Burner and even Cat Videos (you can blame /  applaud
someone named Sanchey who, seven years ago, posted the first cat video ever entitled “Puppy vs.
Cat”).

This week, the magazine chose to ask that question about the
toy industry’s classic summertime toy, the Super Soaker*. The inventor was, of
course, the legendary Lonnie Johnson, who licensed his creation to Laramie. At
the time,Johnson was a NASA engineer and is today working on a way to convert
heat into electricity.

It appears that Johnson has left the toy industry behind and
is into serious stuff.  His new company is called “Energy ‘R’ Us.”  H-m-m-m-m-m-m-m, where did he come up with that name?

There is an interview in the same article with a gentleman
named Ben Trettel who makes homemade versions of the Super Soaker that are so powerful that they have
recoil that can be painful to the shooter.
It’s not clear what it does to the person on the
receiving end but there is a concern about internal bruising.  Why I mention this is that Trettel, who is
now securing his PhD in fluid-mechanics, credits his childhood love of the
Super Soaker as his inspiration.

*The magazine has previously asked the same question about
the equally revered Uncle Milton Ant Farm.