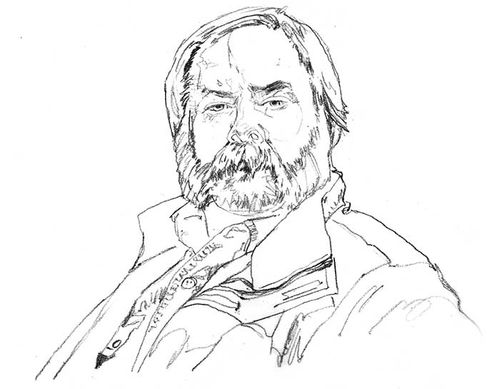 I received several emails and Facebook questions asking how
I go from rough ideation sketches to finished presentation art. While I don’t
mind showing my technique, I do have to be mindful of using client work in
discussing specific stages of the technical process. So, the sample above isn’t
a toy concept but clearly visualizes the key points detailed in this article.

With that said, let me say there isn’t anything more
exciting than glorious color in a toy presentation but the journey from idea
sketch to final presentation art is sometimes a bumpy ride. Here are seven key
points you should consider along the way.

1. Work everything out in the rough pencil stage—from character
design and layout to the most detailed placement of the key components that
serve to form the image. Remember, rough sketches are cheap but mucking around
with problem solving during the final stage gets costly and may actually blow a
deadline. Shadow pattern holds the image together

2. The rough pencil should have an indication of a direct
light source, which even professional designers forget to do from time to time.
I’ve seen plenty of good ideas go to the wayside just because the visual was
flat and uninteresting. This may be the
biggest problem found in most ideation sketches (especially with students) and
one of the simplest to solve. Make sure you pick a direction for the light to
travel across your toy design and reference that to angle your shadows in the
same direction.

4. Capture the personality of your toy and over all design
sensibility before you proceed to the rendering stage. If your sketch lacks
character and has any inherent technical problems such as perspective or poorly
drawn anatomy, don’t think these issues will magically disappear with fancy
rendering.

There is a famous saying that you can put a cape on a pig
but it won’t make him a super hero. Yep, I made that one up. What I’m trying to
say is, those problem areas will become even more prominent as you try to
finalize your image and you can only do so much to cover them up.

As the deadline approaches, even minor mistakes can grow out
of control like a one eyed Cyclops bent on destroying Tokyo unless, of course,
Godzilla fights him in a blaze of special effects wizardry set against the
backdrop of a cinematic sunset. I digress.

Point being, take a moment in the initial stages to make the
right decisions in evaluating your work to avoid problems later on—always
evaluate and re-evaluate your drawings. You can’t shine unless you refine. So,
don’t be afraid to re-work your first sketch—as glorious as it may be—because the
best designers always refine, refine, and then refine some more.