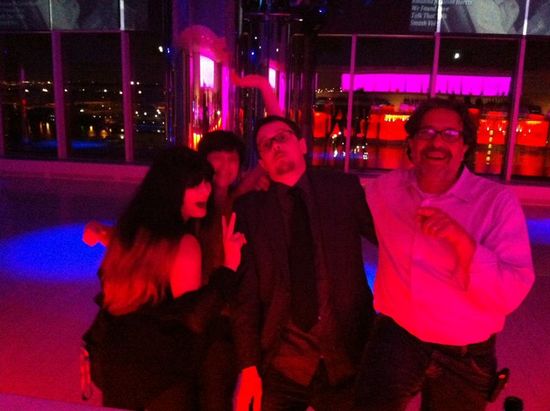 It’s a summer evening in
2006 and my cell phone is ringing. The caller’s number is not one I recognize,
but the familiar 401 Rhode Island area code connotes Hasbro. I pick up:
“Hello?” and am greeted by momentary silence. Then, on the other end of the
line, a distant voice via speaker phone says, “You know Izzo? Josh Izzo?” I
immediately respond that, yes, I do know Josh Izzo. The caller then says,
“Kunoichi?” Again, I have to respond that, yes, I’m Brian and I run creative
and interactive services at Kunoichi. Finally, the caller turns off speaker
phone and picks up the receiver.

He says, “I’m Steve
Drucker and we’re going to be working together. Is it too late to talk?”

That’s how I first met Steve Drucker. He  just had his last week at Hasbro prior
to a long-deserved vacation and a more-deserved retirement. Steve’s nearly
25-year career in the toy industry reached a major turning point this week,
though no one he worked with will assume “retirement” is the end of Steve’s
unequaled efforts to kindle the imaginations of generations of kids. True
retirement is for old men and women. Steven Drucker bears no resemblance to a
retiree. He’s more like the 6-year-old boys he has spent over two decades
creating toys for. His shoes are caked in mud from adventures, his laugh is
unbridled, and in his eye is the gleam of Dennis
The Menace mischief. No, Steve Drucker isn’t going to disappear into the
toy industry history books, but his Hasbro retirement provides a wonderful
opportunity to say thanks to one of the greatest innovators in the toy
industry. After a brief stint as Research and Development Director at
Shelcore Toys, Steve transitioned via acquisition to Cap Toys, famed
manufacturer of 1980s and 1990s hits Stretch Armstrong and Spin Pops. Soon,
Steve moved to another Ohio-based toy industry leader, Kenner Products, which
had recently been acquired by Hasbro as part of its purchase of Tonka
Corporation. (In 1997 Cap Toys Inc. and OddzOn were also acquired by Hasbro.)
For a time, Kenner remained in Cincinnati Ohio and Steve worked on brands
including Batman, Superman, Jurassic Park, and Star Wars. But in 2000, Hasbro
shuttered the Kenner offices and Steve left the Midwest for Hasbro’s East Coast
base. By the time I met him, Steve had expanded beyond his Design Director role
into one of high-level creative strategy. He became intimately involved in
Hasbro’s entertainment efforts, producing and executive producing programming
like Transformers: Armada (2002); G.I. Joe: Spy Troops (2003); G.I. Joe: Valor
vs. Venom (2004); Transformers: Cybertron (2005); Transformers Animated (2007);
G.I. Joe: Resolute (2009); Adventures of Chuck & Friends (2010); and
Kaijudo: Rise of the Duel Masters (2012). In the final days of Steve’s time at
Hasbro, he became a key leader in the newly formed Integrated Play team, formed
to usher in a new wave of app-enhanced toys and games. This latest assignment
is yet another reminder of Steve’s continuous ability to reinvent and adopt new
technologies for the betterment of play.

Steve Drucker has a way of popping in and out, sometimes
disappearing for long stretches only to suddenly call and tell you he is going
to be in your office in 10 minutes. He offers sage wisdom, effortlessly passed
with no thought given to weight and importance. Steve’s mysterious Obi Wan
Kenobi or Gandalf the Grey routine proved appropriate, and over the next few
years I came to see him as something of a wise toy wizard. To me, he had the
unmistakable aura of authority and experience, the rug burn and battle scars of
a lifetime at play. But he also seemed ageless, having a demeanor and posture
of unmistakably childlike quality. Regardless of the complicated and expensive
technologies around him, Steve innovated the way that a child does…by
playing. He would turn an object over and over in his hands, spend weeks
researching, draw in erasable marker or sculpt with his fingers. Technology
were just crude tools to him, no different from the rest in his toolbox. His
every waking hour was spent imagining and making his imaginings take real form.

Within an hour of our first conversation, Steve and I began
working together on projects ranging from brand reinventions to expansive
digital marketing campaigns, from story bibles to animated series. Today, a
week without collaboration with Steve Drucker is a rare one. He has proven to
be one of the greatest influences upon my career, life, and imagination.

Steve, for your retirement I wish you a relaxing vacation and
the new perspective that comes with it. But I also wish for your speedy and
timely return.

Wizards are never late. They arrive precisely when they mean
to.

In
his roles as Digital Strategy Director of Consumer & Entertainment Brands
at Manifest Digital, Co-Founder at toy invention studio Otherdoor
Entertainment, and ChiTAG committee member, Brian Torney is an innovator in the
play industries, kids entertainment, and product/brand initiatives. Refusing to
grow up, Brian has been contributing to the play industries since the age of
15, when he worked at a Chicagoland Toys R Us store. Brian spearheads
ground-breaking creative and interactive projects for industry-leading
entertainment and toy companies including Cartoon Network, Fox, Nickelodeon,
Step2, The Marketing Store, McDonald’s, THQ and Hasbro. He specializes in
cross-platform brand storytelling. Brian also practices ancient Jedi techniques
of mind control… These are not the droids you’re looking for.