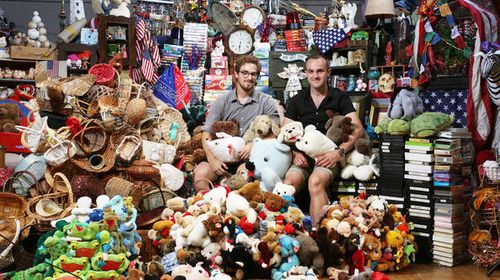 Backdrop to the play "The Capables"

In my last posting I wrote about the Beanie Babies collecting Robinson family and the terrible financial impact on that
family from investing at the height of the Beanie Babies frenzy.  In this posting, I want to write about a new
play, “The Capables.” It is a about hoarding and the way literally piles of Beanie
Babies, Happy Meal toys, clothes and other bric-a-brac are curated into scenery
that New York Times critic Neil Genzlinker, describes as almost worth the price
of admission.

Greg Kozatek did not write the play, Jay Stull did that,
but he is a set designer who used his huge and once valuable Beanie Babies
collection from the 1990’s, as a backdrop for the play.  The Capables centers on a woman who believes that
her collecting is actually art. The play forces you consider exactly where the line between
passion and mania lies.

When I think about it, it seems to depend upon what is being collected and who is doing the collecting.  For example, fabulously
wealthy J.P. Morgan spent a fortune and a considerable amount of his time collecting the
world’s great books and manuscripts.
Today his collection is the basis for the wonderful J.P. Morgan library
in Manhattan.  He is understandably admired for his passion; or was it a mania?

Great works of literature versus Beanie Babies; it’s easy
for us to see the difference in the time-proven
value of what was
collected.  But wasn't the desire to collect
actually the same; only differing in the amount of money each had available to
expend and what they spent it on?

Interestingly, when the play is over, the set will be turned into a flea
market and the audience can purchase the Beanie Babies. Ironic and a little sad; don't you think?