Before there was Fantasy Baseball and its love of
statistics, there was "Strat-O-Matic Baseball" and "All Star Baseball" tabletop games.  Played with dice, spinners, pencils and
cardboard, the games allowed baseball enthusiasts to play out dreams of
managing in the big leagues.

A
very nice piece in the New York Times by Ben Shpigel makes the case for these
games continuing existence with a profile of New York Jets football coach Rex Ryan and his
love of Strat-O-Matic baseball.   The
piece, entitled “Before Football, Jets’ Ryan Mastered Table Baseball,” recounts
the coach’s lifelong obsession.  ““I have
sets, literally, of almost every single year of Strat-O-Matic baseball,” Ryan
said. “That’s how huge I was into it.” 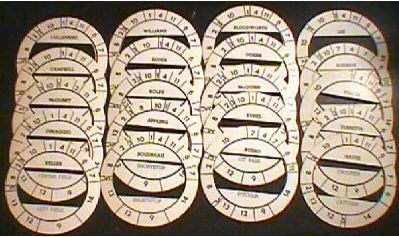 I
used to work at Cadaco and can remember the day that the inventor of All Star
Baseball, Ethan Allen, mailed us a photograph of him with George H. W. Bush and
Babe Ruth.  It seems that Ethan Allen not
only played professional baseball from 1926 through 1938.  He also just happened to be George Bush’s
coach at Yale (he coached from 1946-1968).
Hence, the connection between the

Sultan of Swat and the young man who
was to become our 41st President.
I can still remember our reluctance to even touch such a powerful piece
of history.  I believe someone made a
copy and the original was mailed back.


Sometimes,
when you think about it, a picture is more than a picture and a game is more
than a game.  Strat-O-Matic baseball
anyone?