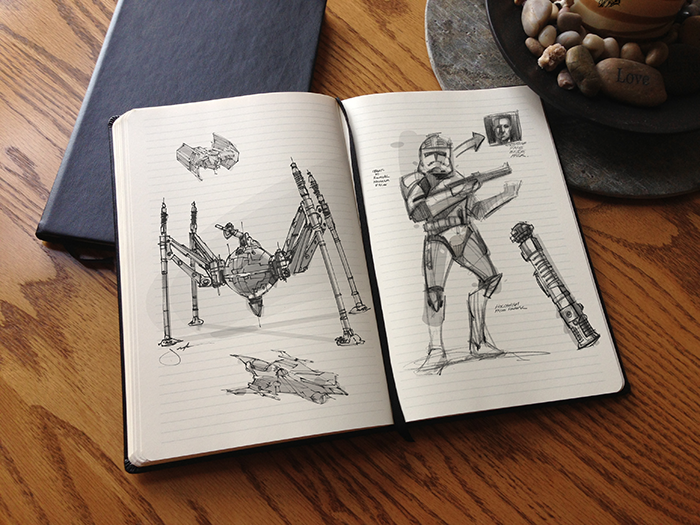 I remember
the first time I walked the halls of Disney Studios. I was like a kid in a
candy store. From animators to background painters and toy designers to storyboard
artists this place had it all. The talent was amazing. Most of my mentors who worked for this studio as
well as Dreamworks and Pixar had many things in common, but one thing that
surprised me most was that they kept idea notebooks—lots and lots of idea notebooks.

You were
probably expecting more than that. I mean, I just dropped a few big industry
names and you were probably waiting for a bigger pay off instead of the humble
word—notebook. You must understand though that these designers didn’t just keep
ordinary notebooks, they kept, well, um—super notebooks!

The books
were amazing because they were filled with everything from brilliant bursts of
ideas and concept sketches to artist technique and color theory. One page would
be filled with toy sketches while the next had notes on how Rembrandt used
light to add dimension to a figure.

Carefully
preserved within these pages were fragments of ideas that over time grew to
shape our everyday cultural experience. Rough sketches that would eventually be
used to inspire now famous animated film characters were quickly scribbled in
the notebooks next to laundry lists and other such thoughts. Toys now known to
the world were nothing more than scribbles—faint visions of a new idea.

An amazing
designer once told me that success is more perspiration than inspiration. I know we all heard that line before but this
guy pointed to his many notebooks as he spoke those words. He smiled as he
explained that brilliant ideas have to be cultivated, carefully watered and
lovingly nurtured. Sometimes they come easy but most often they come by the
strenuous use of one’s brain—that rarely used organ located behind our thick
cranial walls.

I was
surprised to find that each of my mentors had a library of notebooks that
contained flashes of inspiration leading to amazing animated scenes in movies, character
designs and toys that became part of mainstream America. Those creative nuggets
of gold were occasionally used instantly while others waited, incubated if you
will, over months and even years before they fit into a project—perfectly.