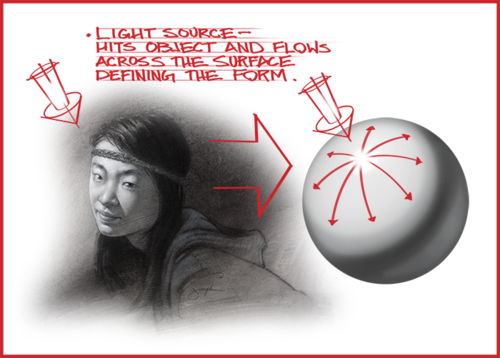 I know the sphere isn’t very
exciting in itself. After all, it’s just a ball with a cast shadow but the simple ball is a building
block for such things as faces and many other components that visually
construct a toy design. In breaking the tonal structure of a complicated face into a simplified form—the mighty sphere helps us more easily understand the path of light.

First, the sphere is divided
into two families of light and shadow. This is key, not only for tonal drawings
but also for full color renderings because every color has it’s own tonal
value. That’s where many designers go wrong in rendering their ideas—be sure to clearly define the areas of light and shadow or your drawings will lack
the sense of three-dimensional form.

Second, the five tonal
values are clearly divided with three in the area of light and two in the area
of shadow (more on this in part 3). Of course, many other tonal values are naturally
created when these five are mixed together, but remember all we need to do is concentrate on the five major tonal bands. This makes the process much faster and organizes the tonal flow of your image to
enhance visual impact and readability. The key to creating strong concept art is to capture the flow of light as it
travels across the object, in this case a toy, creating a tonal path ranging from light to shadow. This simple effect in itself creates the natural flow of dynamic movement in your sketch.

The skeletal structure or bones of the drawing is the shadow pattern as defined by the direct light source because it holds the image together. Once the areas of light and shadow are articulated, all you need to do is render the surface details using the tonal values that fit within those two areas. But how in the world do we do that?