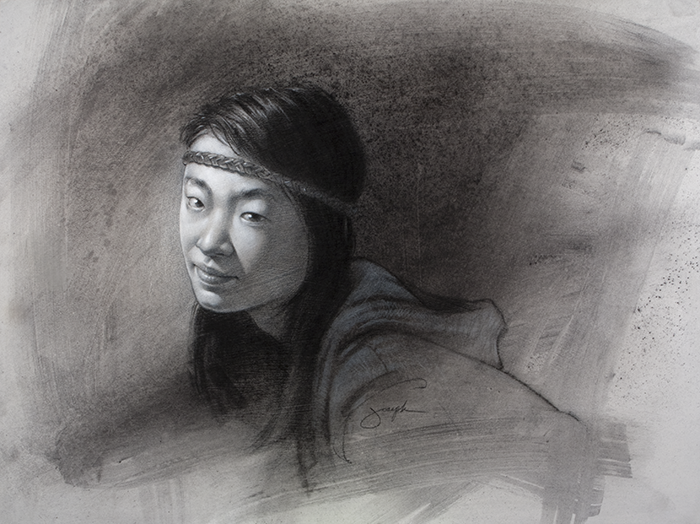 The sample above is a
charcoal painting of my daughter Sarah. It is a technique in which you actually
mix water with granulated charcoal to create the image. Although this technique
would be considered too complicated for most commercial applications, my digital
concept renderings of toy, product and film designs are all based on the same
simple tonal rules—you only get five!

Five you say? There are more
than that in this piece! Well, I do admit that when you actually count them
there are more than five tonal values in the overall painting but what I’m
trying to say is that I only mixed and applied five of them.

This system utilizes the major
tonal values that the human eye distinguishes most clearly which effectively creates
the three dimensional form factor that gives perceived realism and emotional
impact to a flat two dimensional drawing.

In commercial design, you
need to achieve amazing results within the limited framework of time and budget
constraints. Since we have millions of tonal values to choice from, especially
in digital applications like Adobe Photoshop, which ones do we actually use?
What system do you have in place that will help you add form to your toy
designs in the fasted and most direct way?

I would like to share this
age old system of five tonal values passed down by the great masters as seen in
their famous works of art hanging in the Louvre. This technique is also evident
in the concept art that graces the halls and walls of the toy industry.

Michelangelo and Leonardo (the artists not the mutant turtles) used
this system and even Rembrandt took it a step further by making it glow! Now, you
can use this method of concentrating on the five key tonal values too. It's time for you to shine!