One beautiful morning last week, Marty Abrams and I met
for coffee at an outdoor café in New York. I 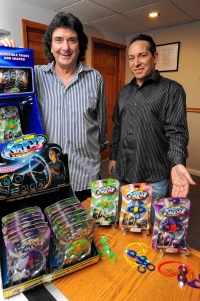 couldn’t help but feel lucky…
lucky to so enjoy what I do, lucky to get to meet such endlessly fascinating
people, lucky to be a part of the toy industry.
It occurred to me then that the amazing stories of the legends in our
industry must be told.

I shared this thought with Marty, and said that I’d love
to write about him. He agreed to be interviewed for this article series, and as
he was talking, a woman that neither of us knew who was sitting within earshot,
walked up and profusely thanked him for providing joy and play to so many over
the years. He was surprised and humbled by this, but it was made obvious to me
once again that interest obviously (and rightfully) spills over into the
public. People are genuinely wowed by the creativity that our industry
routinely demonstrates. It moves them. It profoundly affects them from the time
they’re kids onward.

Marty has lived and breathed the toy business for over 40
years. He started out in his family’s company,
Mego, and has consistently made
mega-hits with popular lines such as Magna Doodle, SkyDancers, Micronauts and early Nintendo launched in the U.S. There are
now over 750,000 websites mentioning products by Mego, and its action figures
are highly prized collectibles worth thousands of dollars. Mego Corporation manufactured the first comprehensive line of
DC and Marvel characters, and there is even – believe it or not – a Mego
Museum. 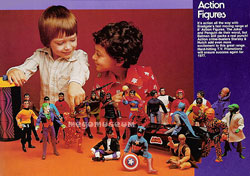 Marty has been called the Father of Action Figures and a true pioneer
of licensed products, once having his story and product gracing the cover of NY
Times Magazine. He has also been featured in People Magazine, and there are no
less than three books written about him. Now the head of I-Star Entertainment,
he’s still filling mass market shelves around the globe.

To say Marty Abrams is
an interesting person, is a ridiculous understatement.

is of his children and grandchildren, and their travels together all around
the world. A year or so ago he and his wife Carol regaled a couple of us with unbelievable stories about their adventurous travels. The morning of our visit,
Marty kindly picked me up from my daughter’s place in East Harlem and proceeded
to tell me I should not let her live there.
I won’t repeat his comments verbatim to my daughter’s defensive remarks
about her neighborhood.  It was a funny
exchange, but it was clear his fatherly advice was sincere – he was truly
concerned for my daughter’s safety and well-being. He’s just that kind of guy.

In recent years, Marty had retired from the rat race of
the toy business, but his hit toy Fireflyz (for which
he  won the 2011 TAGIE Toy
Inventor of the Year  (very interesting and entertaining video of Marty accepting TAGIE Award) with his son-in-law Joel Rosenzweig), brought him back to
the industry as big as ever (NY Dailey News article). He

showed me amazing new technologies he is
developing, pairing them with toys to launch phenomenal new products. He has an
uncanny intuition for what will work and what won’t,  he sees magic and possibility in  things that other industry vets routinely
reject, and he makes a lot of money doing it.

We will further cover Marty’s bigger-than-life story with
experts Brian Torney and Anna van Slee, co-founders of Otherdoor Entertainment,
and HUGE fans of action figures. They will explore his contributions to the
boys’ toy and girls’ toy categories respectively in upcoming articles over the
next few days.