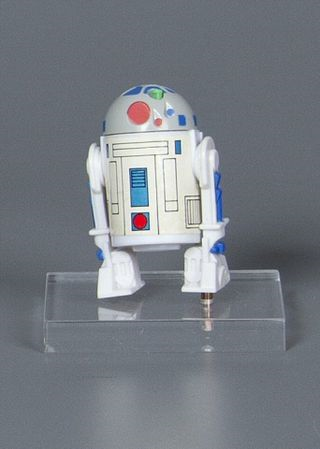 When the first Star Wars movie (now called Star Wars Episode IV: A New Hope) screened in theaters in May 1977, movie audiences marveled at its space-opera plot, engaging characters, and elaborate set decoration. Filmmaker George Lucas produced several more movies in the series and together the films grossed more than $4 billion. Fans today continue to enjoy new Star Wars films and witty, off-color adaptations like Space Balls and Family Guy’s Blue Harvest. The value of the movies, however, paled in comparison to the thrill of purchasing and playing with Star Wars related merchandise (Forbes magazine reported that the franchise generated more than $20 billion over its lifetime). At the center of the Star Wars merchandising empire stand the 3.75-inch, plastic action figures. Kenner toy company initially purchased the rights to produce Star Wars action figures and other toys before the release of the 1977 movie. The scarcity of the plastic ingredient petroleum led the company to model its figures in small scale, as compared to the scale of other popular toys like G.I. Joe, Captain Kirk, and Mr. Spock. Kenner also produced small scale models and play sets representative of the movie. Children used the tiny figures of Luke Skywalker, Hans Solo, Chewbecca, and Princesses Leia, among others, to reenact scenes from the movies or to create variations of the story. With no new movies to drive toy sales, Kenner ceased production of the 3.75-inch Star Wars action figures in 1985. Production did not resume until 10 years later when Hasbro (which had acquired Kenner in 1991) issued another line of Star Wars figures called Power of the Force (POTF). Collectors now refer to this series as Power of the Force 2 to distinguish these figures from the POTF figures of 1984 and 1985. POTF 2 figures feature exaggerated “buff” physiques and disproportionate features. When kids played with POTF 2 figures, they struggled to get the oversized musculature figures into the vehicles sold for play with them (if you’ve ever tried to fit a Jem doll into a Barbie Corvette, you might relate to this dilemma). The success of Star Wars action figures revolutionized the toy industry. Last year, The Strong acquired a collection of 1,950 of these action figures. They had been collected by one-time model maker for Industrial Light and Magic, a special-effects company that contributed to the magic of the Star Wars movies. The items in the museum’s collection represent 29 unique product lines and about 85 percent of the 2,300 distinct figures manufactured over the last 35 years. Last November, Star Wars action figures joined the other august toys honored in the National Toy Hall of Fame at The Strong. It seems like big honors for such itty bitty toys, but these figures demonstrate the iconic stature, longevity, and creative play essential to earning National Hall of Fame status.