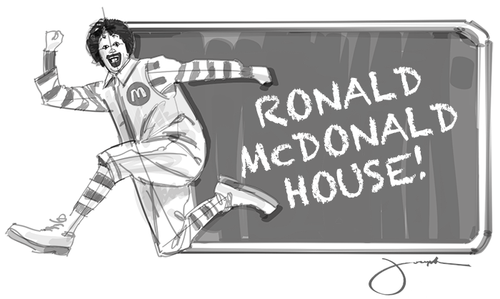 The Ronald McDonald House is an amazing place. I had the honor
of conducting storyboard and toy design classes for the terminally ill children
for over a year. The medical personnel are the most dedicated and caring people
I have ever met. Having worked on toy and product design for McDonald’s over
the years, I have come to respect their commitment to the children and their
families by providing these truly amazing services.

All of the children were special, but one sticks out in my
memory and I wanted to share her with you. We’ll call her Ladybug—an adorable
child who loved to draw. The first time she came to the playroom to attend my
class was a bit challenging, in that we had to position her wheel chair so she
could see me work up close. By this time, the disease had taken its toll and it
was very difficult for her to hold anything, let alone draw. Her vision was poor
but she was still filled with wide-eyed wonder.

Nothing could stop her though, as she hunkered down and drew
one drawing after another. I’ll never forget how her face glowed with joy even as
she struggled to hold her crayon. At one point, she dropped it and let out a
frustrated sigh. I took her little hand in mine and we drew a really cool house
together with flowers, trees and a big beautiful sky.

Ladybug came to every session and her hospital room was filled
with her art and a lot of toys. She loved toys as much as drawing and would
giggle over and over after each toy released its function. You see, to me, it
was a toy function but to her it was pure joy and wonder. She named each toy
and would teach them how to draw as well.

After a few weeks attending my class, Ladybug decided to do
a storyboard just for her mom and committed all of her time to that. By this
point it was extremely difficult for her just to move. One day, as she was sketching
she abruptly laid her crayon down to rest her head on my shoulder. Her mom
patted her back and adjusted the bandana that creatively covered her bald head. She had several bandanas, including one with the signatures of her classmates, but the go-to seemed to be the one with the bright red ladybug print.