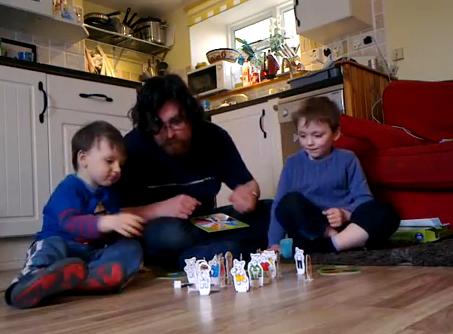 Two
weeks ago, I wrote a piece entitled:  “Kids
and the Fight for Time.”  That posting
spoke to the decreasing amount of time that over-scheduled children have to
play.  John Bray, who blogs at johnthetoyshopguy.wordpress.com,
had some thoughts of his own on the subject.
I found what he had to say to be of interest and I think you will as
well.

John
Bray has spent nearly 10 years of his life studying philosophy: his research
focussed primarily on what it is that makes us the people we are. He also has
two young sons and works in a toy shop. As a result of all of these things his
views on toys and parenting can sometimes have an unusual slant.

Sometimes a couple of
random things coming to my attention at the same time can be enough to get me
writing, and this happened last night: first I read a short article by toy
industry writer Richard Gottlieb about kids and the fight for time when it comes to play, he basically points out that the
upsurge in app play over traditional toys might be due to the stretched
schedules of children, the next thing I read (literally about five minutes
later) was one of these viral stories from facebook (I’ll post the transcript
at the bottom of this post) which describes the lengths that a little boy had
to go to get some time with his dad. Normally I don’t spend much time looking
at that kind of thing but the timing was strange so I read on. Mixing these two
together I started to think about how hard it is for parents of even fairly
young children to fit in some quality play time with their kids.

Thanks to Orchard toys we’re now the proud owners of brand new
boxes of Baa
Baa, Pirate Shapes and Rocket Game
and I’ve got to admit we’re all playing a lot more games at home now. Finding
the time to sit down and play a board game always used to seem like a bit of a
struggle. We’d be running the boys round different clubs/ groups etc., getting
Logan to nursery, getting them to sit down and eat their meals, in amongst this
we’d let the boys decide what to play, so board games, puzzles or anything else
that sat away in the book case often didn’t get looked at. Thanks to the time
management it took to get our first couple of ‘Toy Testers’ reviews done I’ve
now realised that it’s OK for daddy to pick what we play sometimes and it’s
made it so much easier to fit in things like games, puzzles and non-bedtime
stories.

I’m not saying that
these things never
got played with before, it was just that they normally didn’t get looked at unless
it was a day when the whole family was together and we hadn’t arranged to be
heading out anywhere. I’m not sure if I’d go so far as to timetable the boys’
play from now on but having a deadline meant that I had to sit them down and
play with something specific and they both loved it. In the past I’ve confessed
to a lack of confidence about
doing crafty stuff with the kids (mainly because of the chaotic mess I can
imagine whenever I think about it) but I’m starting to see how it could work.
Maybe it’s because the boys are a bit older now too and they’re starting to
appreciate a more timetabled play time, trying out new things and getting some
one-on-one time with us.

All I can say to Gottlieb’s article is that although parents do feel more
obligated to get kids along to clubs we need to think about the motivation for
that. I was a telly addict as a kid and gradually moved on to be hooked to my
games system and when I became a dad I decided I wanted to try and expose my
son to more than just TV and other ‘indoor’ stuff. With this in mind we signed
Logan up to a whole bunch of activities, groups and classes from when he was
very young to try and make sure he socialised with other kids and also (an
important one for me) we didn’t want him to feel intimidated by sports. I’m not
sure if the motivation for clubs etc. is the same for other parents.

I often hear (from
parents of older children than my own) how much they despise the games systems
their kids are hooked to and that they’ve signed them up for this class or that
group to try and get them out of the house and away from their computer games.
Gottlieb points out that the more kids are signed up to classes the more time
they’ll spend travelling to these classes and the more time spent travelling
the less complicated the toys they use on the way will have to be; here
entereth the app. An iphone, tablet or

whatever can be handed to a child in the
back of a car and they will stay occupied until they reach their destination.
This simple fact could easily be a big part of the rise of the children’s app.
With this in mind let’s just stop and think for a second; parents are signing
their kids up to more clubs etc. to get them away from games systems only to
hand them a computer game to play with on the journey, am I the only one that
finds this strange?

Gottlieb suggests
that the toy industry needs to adapt to this market and I heartily agree, since
an industry that doesn’t adapt is set to fail. However a toy shop can’t join in with
this without ceasing to be a toy shop, so for those of us who still sell toys
we are faced with a challenge. We need to show parents how easy and fulfilling
it can be to step away from the games systems and apps for a few minutes.

Fancy a game of charades? You can get yours here

Once you play a board
game with your kids or spend some time doing crafts it becomes clear that these
activities aren’t just about keeping them occupied; it’s about maintaining a
relationship and keeping the lines of communication open. For all the TV I
watched and all the computer games I played as a kid I still cooked with my
parents, played board games, read stories, went on days out; in short I still
had quality time with them. This went back a long time, it wasn’t a last ditch
attempt to connect once I hit my tweens/teens, it was a part of my day-to-day
life for as long as I can remember and because of this I had a real
relationship with my parents. I told them everything I did throughout my teens,
and they were there with advice and support when I needed it. The old adage
‘talk to them now and they’ll talk to you later’ definitely holds true.

Apps are fun, they’re
a clever little diversion packed comfortably into your phone/tablet for those
times that you just need to keep your child occupied for a few minutes but
that’s all they can do. They will not keep you bonded with your child, they
won’t stimulate their social abilities and they won’t make them feel loved. I
don’t think I’m being over-dramatic when I say that an app will keep them
occupied but a board game could keep your family together. Time dedicated to
your family should translate into a dedicated family and there’s no harm in
trying at least. After seeing how easy it actually is to slot in a wee bit of
structured play I’ll definitely be doing more myself, time will tell if I’m able
to hold my own against the wave of computer games that will be heading Logan’s
way in the next few years.

Here’s a link to the
board games sections for wee ones, for older kids and to our ‘family games‘ section on our web site, if you don’t
have any board games kicking about the house or if you fancy trying something
new it’s worth a wee look. I’ve even thought of a slogan; ‘Board games, a box
of family therapy’ (yeh it’s not very good is it? Ah well you get the idea).

Have I angered you,
made you feel contemplative or do you now feel superior because you already
schedule quality time with your family into your day. Whatever the case I’d
love to hear from you so feel free to pop a comment in the comments box below.
Once again thanks for reading, Cheers, John

DAD: “That’s none of your business. Why do you ask such
a thing?”

SON: “I just want to know. Please tell me, how much do
you make an hour?”

The father was furious.

DAD: “If the only reason you asked that is so you
can borrow some money to buy a silly toy or some other nonsense, then you march
yourself straight to your room and go to bed. Think about why you are being so
selfish. I work hard everyday for such this childish behavior.”

The
little boy quietly went to his room and shut the door.

The man sat down and started to get even angrier about the little boy’s
questions. How dare he ask such questions only to get some money?

After about an hour or so, the man had calmed down, and started to think:

Maybe there was something he really needed to buy with that $ 50 and he really
didn’t ask for money very often. The man went to the door of the little boy’s
room and opened the door.

DAD: “I’ve been thinking, maybe I was too hard on you earlier. It’s been a long
day and I took out my aggravation on you. Here’s the $50 you asked for.”

Then, reaching under his pillow he pulled out some crumpled up bills. The man
saw that the boy already had money, started to get angry again. The little boy
slowly counted out his money, and then looked up at his father.

DAD:
“Why do you want more money if you already have some?”

SON:
“Because I didn’t have enough, but now I do.

“Daddy,
I have $100 now. Can I buy an hour of your time? Please come home early
tomorrow. I would like to have dinner with you.”

The father was crushed. He put his arms around his little son, and he begged
for his forgiveness. It’s just a short reminder to all of you working so hard
in life. We should not let time slip through our fingers without having spent
some time with those who really matter to us, those close to our hearts. Do
remember to share that $100 worth of your time with someone you love? If we die
tomorrow, the company that we are working for could easily replace us in a
matter of days. But the family and friends we leave behind will feel the loss
for the rest of their lives. And come to think of it, we pour ourselves more
into work than to our family.

Some
things are more important.