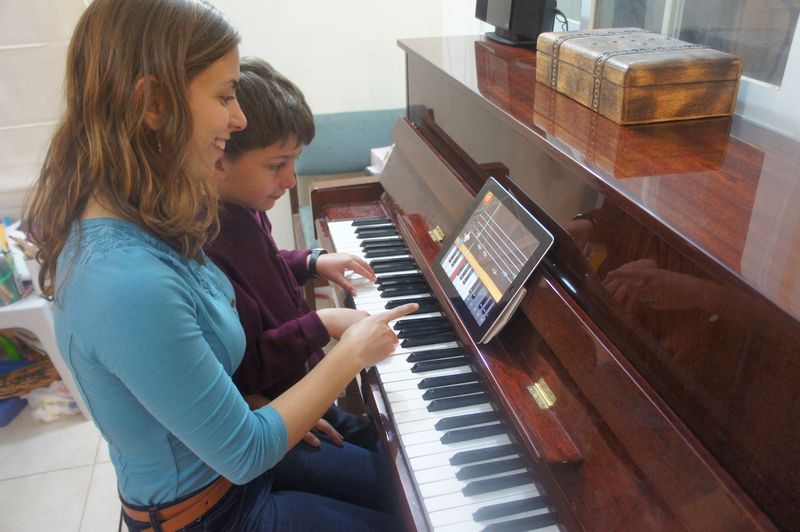 Practice makes perfect when learning to play a musical instrument.
While children often have fun playing the instrument, it can be a
struggle for parents and educators to entice them to practice regularly.

Israeli-US startup, JoyTunes
has developed a technology that combines tablets with traditional
instruments, providing a practice tool that transforms music education
into a fun game.

“By downloading individual JoyTunes games in the AppStore or
purchasing a subscription, educators, extracurricular music teachers and
parents can use technology to enhance rather than replace instruments,”
said JoyTunes Co-Founder and  CEO Yuval Kaminka.

The startup’s iPad games, currently for the recorder and piano,
incorporate an acoustic engine technology that allows the game to
recognize the sounds a child plays on the real instrument.

It is currently building several apps for the piano on multiple
levels, Kaminka said. In the future, JoyTunes plans to expand over both
instruments and multiple platforms, making the tool available not only
for iPads but for Android, Windows and other tablet devices. The company
also aims to expand its audience beyond kids to include anyone wanting
to learn music.

In May, JoyTunes raised a $1.5 million round of funding led by
Genesis Partners. Other investors include Founder Collective, Kaedan
Capital investment group, Joe Lonsdale Co-Founder of Palantir
Technologies and super angel Zohar Gilon, along with other angel
investors.

The JoyTunes management team includes a combination of musicians,
music educators, game developers, signal analysis experts and graphic
designers. Its technology team works with the musical direction of Yigal
Kaminka, an award-winning international musician who is also the
brother of co-founder and CEO Yuval.

Yuval Kaminka, previously worked in computer programming for the
Israeli Defense Forces. Following his time in the military, he worked
for companies such as WatchFire and ConicIT. He came up with the
JoyTunes idea after noticing that his young nephew would rather play on
his Wii than practice his music.

JoyTune’s CTO  Roey Izkovsky is responsible for all of the research,
development and creation of the technology behind the educational games.
He is a published mathematician with a master’s degree from the
Weizmann Institute of Science. He has also guest lectured at the Open
University of Israel. Izkovsky spent more than six years with the
Israeli Defense Forces, where he headed up the research unit of an elite
army intelligence unit.

It was during his tenure with the IDF that he met Yuval Kaminka, and
later joined him and his brother Yigal, to co-found JoyTunes.

Together, the team builds the components to its musical games to help train kids to make real music with real instruments.