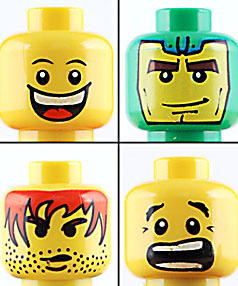 Researchers at the University of Canterbury in New Zealand have just completed a study on the evolution of Lego action figure faces. According to their study, “Agents With Faces – What Can We Learn From
LEGO Minifigures?” the faces of these characters have since the 1990’s progressively become more serious. In fact, their study of 3,655 reveals that they have become “angrier”.
Here is the current “Count of Face per Emotion”

I was asked by Monitor Radio in the UK to do an interview regarding the impact that angry Lego faces might have on children. Their core question was: “Wouldn’t it be better that all figures had smiling faces?”

My first comment to the interviewers was that I thought that the expressions on a parent’s or sibling’s faces was going to have a much greater impact on a child’a world view than a Lego face ever would. I went on to say that, in fact, I thought that Lego was providing children, and particularly little boys, with a wide ranging menu of emotions from which to choose.
In my opinion, the notion that the only way to confront danger or even death is with a smile is a false message to children about what it

means to be brave. You can, in other words, be scared and still be brave. I think therefore that the move to a range of expressions is a healthy innovation.

It is a credit to Lego that they have reached that level (think Barbie) in which they are seen as having an outsized impact on childhood. I suppose it is one of the prices of success.