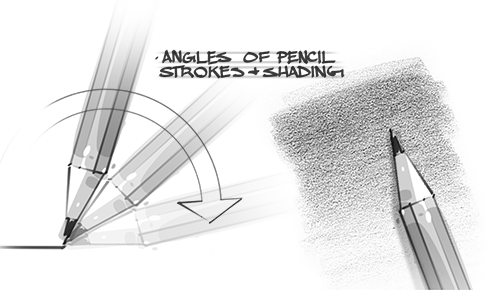 The toy sketches in this four-part article were done using
Prismacolor pencils. I did several exploratory drawings using reference material supplied by the studios going from very rough sketches to gradually building up to the
final tonal rendering. The depth of emotion using the mighty pencil, even in a
concept sketch of a toy, can really take your next ideation pitch to the next
level.

Just like any musical instrument (refer to my heartbreaking
high school flashback in part one) you need to learn how to play it. The
pencil needs to be fully articulated to get the full range of notes. My diagram
below shows the full range of angles needed to get various line widths and
tonal values. Sometimes, however, the simplest of concepts are the most
difficult to master.

One of my students defiantly told me he knew all about that
sort of thing—using the side of the pencil isn’t rocket science he muttered.
Knowing and doing, however, are two different things. The difference between a
master musician and a student is knowing how to play the instrument to it’s
full potential—using it’s full range. This is the difference between making
music and making noise.

There is a big debate about fine art versus commercial art
by those who have time to sit in coffee houses debating such things. As for me,
I have always endeavored to bring fine art techniques into my design applications.
It can be argued that concept sketches don’t need to have that level of
artistic quality—but those that do seem to get through the production workflow
much easier and solve many costly process issues normally inherent in lower
quality communication art.

I have been very fortunate to have worked with and learned
from some amazing master artists in the design industry. I’m just doing my best
to stay true to their commitment and vision. There’s an old saying that if you
don’t shoot for the stars you just might hit a streetlight and get arrested. I
actually made that up. It’s not really a famous saying. I guess what I’m trying
to say is render your big idea the best you can and shoot for the stars.