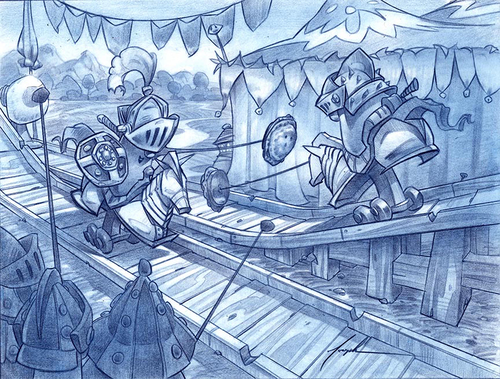 You might think my love of the pencil is crazy—the thoughts of an utter mad man!
After all, it's only a piece of lead surrounded by a thin layer of wood capped off with an eraser that usually doesn’t work well unless you
know which brand to buy—but I digress.

Yes, I concede that the pencil is nothing more than a cheap
everyday item found in any household and usually hidden deep within a messy
drawer—we all have such a drawer most often located in the kitchen. Now don’t
pretend you don’t have such a drawer and don’t even come off with the attitude
that your drawer isn’t messy because everyone has a messy drawer unless, of course, you’re
my mother in law. So, anyway, you open the drawer and things fall out but somewhere
under the mess usually next to your old cell phone charging cable is the most
amazing instrument of all time—the mighty, trustworthy, ever dependable—pencil. Next to your dog it's your very best friend. No need to charge or upgrade to the next operating system—just sharpen and you're good to go.

All right, so now you know my feelings about the mighty pencil.
It’s magical. Sometimes, when I think about the steady workhorse named No. 2 and the
unbelievably depenable HB, well I just get misty eyed. So, I’m not even going to mention
the Ebony Black Prismacolor or the Indigo Prismacolor—there, I let it slip out. I
tried not to but I did it anyway. Eyes welling up—I need to take a break now
from typing.