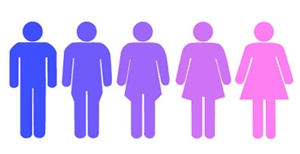 As those of you who read me regularly know, I have done a
great deal of research around gender and play.
In doing so, I have questioned the wisdom of the  toy industry having taken such a binary
approach to gender (its either a boy’s toy or a girl’s toy) in how it packages,
markets and merchandises toys.  In short,
I think it has cost the industry business by making certain kinds of play off-limits
due to gender.

One of the conclusions I came to through my research was
that girls and boys do cluster around types of play (very young boys for
example do seem to have a thing for guns and violence and girls for fashion and
princesses) but that play choices are not either / or but rather run on a
continuum.  In other words, though we do cluster
by gender in our preferences, children as individuals have a broad range of
interests over time and in the moment.  The
same girl who likes to play dolls most of the time, can still like to play with
guns, cars and trucks.  And, believe it
or not, some boys when left alone do play with dolls.

I found support for that notion in a nice piece by Bobbi
Carothers a senior data analyst at Washington University in St. Louis and Harry
Reis, a professor of psychology at the University of Rochester.  Entitled “The Tangle of the Sexes” and published
in the New York Times, the article makes the point:

“That men and women differ in certain respects
is unassailable. Unfortunately, the continuing belief in “categorical
differences” — men are aggressive, women are caring — reinforces traditional
stereotypes by treating certain behaviors as immutable. And, it turns out; this
belief is based on a scientifically indefensible model of human behavior.”

Carothers
and Reis support their claims with a study they conducted consisting of 122
different attributes.  It involved over
13,000 people and as they put it:

“…one conclusion stood out: instead of
dividing into two groups, men and women overlapped considerably on attributes
like the frequency of science-related activities, interest in casual sex, or
the allure of a potential mate’s virginity. Even stereotypical traits, like
assertiveness or valuing close friendships, fell along a continuum. In other
words, we found little or no evidence of categorical distinctions based on
sex.”

It makes you
think that departmentalizing toys by gender may not only be a mistaken notion
but even bad for business.  It wouldn’t
hurt to be a little more ambiguous about for who toys and play is meant.  After all the Makies company calls their
figures “Action Dolls.”  Maybe they’re on
to something.