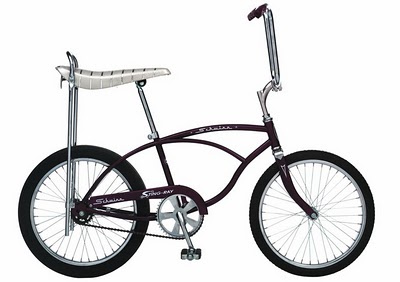 If you are old enough, and many of you are, you have fond
memories of suburban streets filled with kids riding on Sting-Ray bikes.  Al Fritz, the father of that bicycle, died
this week at the age of 88.

Fritz did not invent the design but had the pop-culture
awareness to expand on a California street fad and turn it into a powerful
group memory for a generation.  Looking
back, you can see how the Sting-Ray was an extension of California car culture.

Here is how a writer on the “cycle Smart texas” website
describes them:  “'Cool was a single-speed Schwinn Stingray. Many kids rode those, or
bicycles like them, with banana seats, ape-hanger bars, small wheels, low
gearing, and rear "slicks.'"

It appears that Mr. Fritz didn’t just have
pop culture awareness but the strength to believe in his creation.  According to an obituary in the Los Angeles
Times:  “The people who looked at his prototypes thought
it was a stupid idea, but he pushed it on through.”

Eventually
the bikes went on to have stick shifts, wild colors and other design features
that made it by far

the most popular bicycle of its time.  In fact, it and its copy cats eventually
accounted for 60% of all bicycle sales in the US.

As
we drive around our modern cityscapes we see a teeming, multi-generational population of
helmet wearing bicycle riders using special bike lanes to keep them safe and to
get them where they are going.  I bet we
could make a case that that modern love of bicycling is Al Fritz’s greatest
gift to us.

Now
go out and ride a bicycle…and thank Al Fritz.