As I explore in Euromonitor International's new global briefing, "Global Licensing Trends in Traditional Toys
and Games", licensing is one of the key parameters affecting toys sales
globally. More than half of the top 10 most heavily licensed traditional toys
and markets are in Asia Pacific, and in almost all these markets the proportion
of 0-14 year-olds in the total population was below 20% in 2012, suggesting that
the grown-up population also has a say in which licensed toys are purchased. As
toy brands penetrate into other industries beyond toys and games at a faster
pace, there are certainly great opportunities as well as risks. The only
question is how to locate them.

The penetration of licensed toys in overall toy sales continued to increase
across the majority of countries in 2011. With their entertainment media
backing, licensed toys often carry a higher price tag than their non-licensed
counterparts, allowing higher margins for manufacturers. 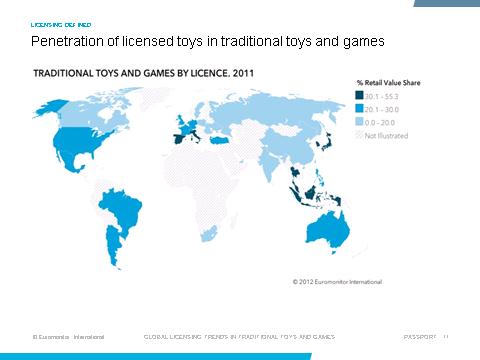 In almost all of these markets the proportion of 0-14 year-olds in the
overall population was below 20% in 2012, suggesting that the grown-up
population also has a say in which licensed toys are purchased. Although less
than one third of traditional toys and games are licensed, Japan is the largest
licensed toys market in the region, accounting for more than half the region’s
sales in actual terms.

Through the influence of its Hollywood blockbuster movies, the US has a huge
impact on global toy licensing trends. However, highly anticipated releases such
as Transformers 3, Cars 2, Captain America and Thor failed to lift toy sales in
2011, due partly to dwindling movie attendances.

In the UK, the market became even more dependent on licensing during the
recent recession, at which time cinema takings and DVD rentals were higher than
ever. This has given the toy industry more opportunity for expansion into
licensing, as well as increased marketing opportunities, at a time when new
product development has slowed.

In Eastern Europe only one fifth of toys are licensed

Licensing penetration within traditional toys and games in Eastern Europe
remains very low. In Russia, the largest licensed toys market in actual terms in
the region, the market has seen rapid growth of 15-20% year-on-year and key
manufacturers and retailers are increasingly seeking ways to collaborate with
the biggest foreign and local licensors.

Toy brands are increasingly expanding beyond toys via licensing

While children influence decisions on toys, their influence on groceries and
household items is much lower. Targeting the right category and demographic, and
having brands consumers can relate to are crucial elements of a successful brand
licensing concept.