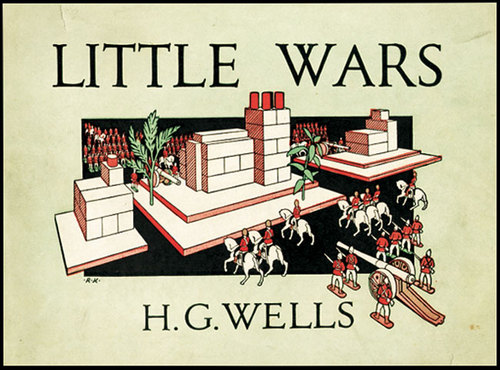 If you move to the last inside page of the May 5, 2013
New York Times book review, you will find a fascinating tribute by mark Wallace
to H.G. Wells on the 100th birthday of his game invention:  “Little Wars.”  It seems that Wells was not only an early
Science Fiction pioneer (War of the
Worlds, The Time Machine and The Invisible Man to name a few) and of
serious non-fictioin (The Outline of
History) but also the progenitor of war gaming; both the play and the serious
kind. Trace a line back from military video games like “Call of
Duty” or whole genre like Dungeons & Dragons and you will find that they
all trace back to Mr. Wells’ invention.  Wells,
according to Wallace, was “inspired by a child’s discarded toy soldiers and
breech-loading cannon.” Upon spying them, he was inspired to write down a set
of rules for playing a war game with toy soldiers, books, blocks, cardboard
houses, and other contrivances.

Lest you think that the game has vanished into the mists
of history, you can actually download the book for free, complete with
pictures, from Gutenberg.org.  You can
also attend “Little Wars” events like the one that takes place annually in St.
Charles, Mo.

I was struck by three thoughts as I read the
article and the introduction to the book itself: